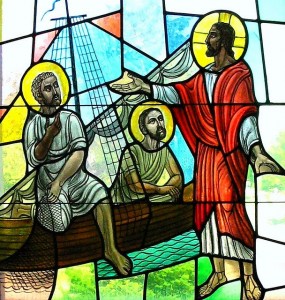 “Come after me and I will make you fishers of men.” (Mark 1:17) Most of us have heard that scriptural quote many times. It occurs at the very beginning of Mark’s Gospel and involves Mark’s reporting of the beginning of Jesus’ ministry in Galilee. There is a reason that Jesus called these simple men to be His first followers. In part it is an example to each of us.

Peter, Andrew, James, and John were not theologians; they were not learned; they were not known for their skills in speaking to and influencing crowds of people. They were fishermen. God has gifted each of us with various skills and stewardship calls us to use those skills to build the Kingdom of God.

However, just as the Lord recognized something in those first Apostles, He sees the same in us. It was not what Jesus thought those men could accomplish, but His understanding of what they could do with Him, and Him working through them. In the same way we can accomplish much if we allow the Lord to work within us and through us. The well known late broadcaster Paul Harvey once said, “Too many Christians are no longer fishers of men, but keepers of the aquarium.” Stewardship is the means by which we, just as the first Apostles did, can become evangelists and “fishermen,” so to speak.