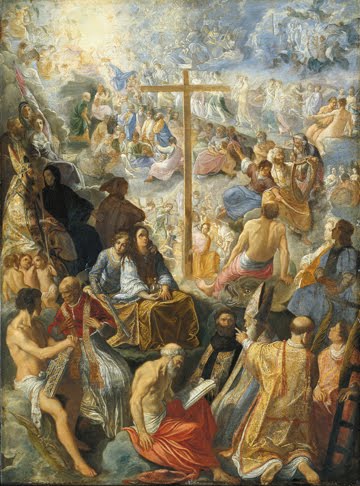 On this Feast of the Exaltation of the Holy Cross, we celebrate the Holy Cross as the instrument of our salvation. Multiple times in scripture a reference is made to Jesus having been “hung on a tree.” This reference to the Cross as a tree has a much deeper meaning for us. The Cross became a life-giving tree for us, and it turned around Adam’s original sin when he ate of the tree of knowledge in the Garden of Eden. The Cross is so central to our beliefs.

The readings for this Feast each have a strong relationship to our appreciation of and our understanding of the meaning of the Cross. The first reading is from the Book of Numbers. Numbers is the fourth Book in our Old Testament (also the fourth book of what is called the Pentateuch, the first five books of the Old Testament). It derives its name from the historical fact that it involves two censuses taken of the Israelites during their time in the wilderness, one at the beginning of the trek and one at the end. This particular passage from Numbers 21 describes how the people are discouraged and they literally speak out against God. One of the hallmarks of stewardship is trust in God, faith in the Lord, our hope in salvation through Jesus Christ. Like the Israelites, we may at times become discouraged, but we must always focus on the fact that God is there for us always, that He watches over us, and that He is our strength.

Paul’s letter to the Philippians, our second reading, presents Jesus as the ultimate example of humility. As much as we may resist it, humility is another key characteristic of a stewardship way of life. From His humble beginnings in a manger to the humiliation of death on the Cross Jesus bore humility like none other. His example of humility is a standard for each of us as we approach living as a steward. St. Paul makes reference to some of Jesus’ humiliations, but it is well for us to keep in mind all the ways the Lord might have approached living among us, but He chose the more humble approach consistently, represented by His birth, the fact that he came as a baby, not as a grown adult; His willingness to be a child beholden to His parents; His humble way of teaching and addressing people; His humble approach to life in general, becoming a carpenter, a basic and useful trade; but most of all His humble acceptance of death on the Cross with all of the agony and sacrifice associated with that.

“For God so loved the world that he gave his only son, so that everyone who believes in him might not perish, but might have eternal life.” (John 3:16) That scriptural statement, considered by many to be the central and climactic point of John’s entire Gospel, is so full of consequence to us as Catholics and Christians that we could almost analyze it in detail phrase by phrase. Let us just examine the opening phrase, “For God so loved the world…” We have a tendency to filter our own understandings through the many ways a word is used and what it may mean to us. The word “love” certainly falls into that category. The love described here, the love that God feels for us, that He felt for His Son, and that was returned to Him by His Son, is a love almost beyond our comprehension. It is a complete love, shared with all and felt for all, believers and non believers. There is no way that we can match or equal that love. It is a love beyond our ability to feel, but that is exactly what we are called to strive toward. Another word for stewardship is quite simply “love” — unconditional and total.