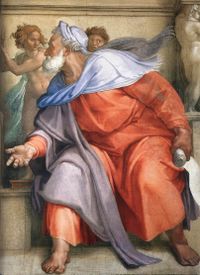 For where two or three are gathered together in my name, there am I in the midst of them.” That is one of those statements made by the Lord with which almost all are familiar. The key, of course, is gathering “in His name.” Most of us realize that Jesus is with us always, but His point is that if we acknowledge His presence and are conscious of it, His presence is greater.

On this Twenty-third Sunday in Ordinary Time we hear words of wisdom, comfort, and encouragement. Our first reading is drawn from the Book of the Prophet Ezekiel. The name Ezekiel means “God gives strength.” That in itself is a message we would be wise to remember and to use in everything we do. Ezekiel was born around 627 B.C. Recall that the Babylonian invasion and the destruction of Jerusalem by the Babylonians occurred in 586 B.C., 41 years after Ezekiel’s birth.

Ezekiel is considered a major prophet. Were you aware that each of us who has been baptized is considered a prophet as well? The Catechism of the Catholic Church describes it this way: “In Israel those consecrated to God for a mission that He gave were anointed in His name. This had to be the case all the more so for the Messiah Whom God would send to inaugurate His Kingdom definitively. It was necessary that the Messiah be anointed by the Spirit of the Lord at once as king and priest and also as prophet.” (Catechism of the Catholic Church #436) In Baptism we are each anointed, and we each are called to be prophets.

Contrary to popular perception, the prophets did not so much predict the future as to comment on their present. Through stewardship each of us is called in the same way to be aware of the present every day and to devote ourselves to service to God and to others. Just as Ezekiel reflects the coming of Christ in today’s reading (“You, son of man, I have appointed watchman for the house of Israel.”), a comment that gives hope to the people, one of our roles as prophets is to bring hope to others.

And what is the best way to bring that hope? St. Paul in our second reading sums it up as Jesus did, “You shall love your neighbor as yourself.” At the beginning of today’s reading from Paul’s letter, he says, “Owe nothing to anyone, except to love one another.” That statement has been debated for centuries, as some who take it literally have concluded that Christians cannot have a debt. However, they are ignoring that important clause which follows, “except to love one another.” That is our debt and that is a major motivation to be a good steward. St. Paul is not talking about credit cards; he is talking about Jesus’ challenge to us to love one another, and the Lord’s call to discipleship and stewardship.

As mentioned at the beginning of this reflection, today’s Gospel closes with Jesus saying, “Where two or three are gathered together in my name, there am I in the midst of them.” Note that just prior to that the Lord says, “…amen I say to you, if two of you agree on earth about anything for which they are to pray, it shall be granted to them by my heavenly Father.” As is sometimes the case there is a stewardship message hidden among those statements. In ancient Greek the word translated as “agree” also meant to “harmonize.” The implication of that is that each of us is called to share our gifts, and when we all share together we produce a great chorus, a grand anthem, for it is together through stewardship that we are powerful, and when we do that in His name, we are most effective.