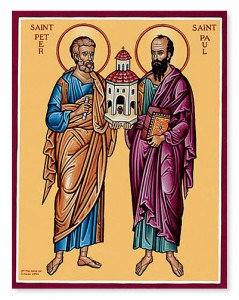 Today we celebrate the Solemnity of Sts. Peter and Paul, Apostles. It is appropriate for us to commemorate these two pillars of our Church. St. Augustine said some 1,600 years ago: “Both apostles share the same feast day; for these two were one, and even though they suffered on different days they were as one… Let us embrace what they believed: their life, their labors, their sufferings, their preaching, and their confession of faith.”

On this Solemnity in 2013, Pope Francis included in his sermon the three reasons he rejoices at the lives of Sts. Peter and Paul. In the Gospel Peter proclaims his faith in stating, “You are the Christ, the Son of the living God.” His Holiness pointed out the first reason is faith, “Faith in Christ is the light of our life as Christians.” He detailed the second reason as love. He cited Paul from the second reading saying, “I have finished the race; I have kept the faith.” Then he challenged each of us: “It is your task to go outside of yourselves in the love and service of the holy people of God.”

His final reason was unity (not uniformity he explained). He detailed himself as the successor of Peter, and as Paul as well. Pope Francis felt each of them and each of us is part of the great mosaic of the Church. Viewed individually, we are not defined, but all together as the Church, we present a clear picture of God’s plan. Are you, as a steward, fulfilling your part to present the Church as one?