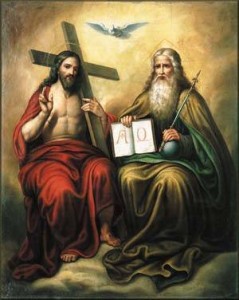 From the time we are children within the Church, the concept of the Holy Trinity may be difficult to understand. In fact, in a sense it is beyond our ability to comprehend it. The readings on this Sixth Sunday of Easter provide references and prefaces for this belief.

In today’s Gospel, specifically in John 14:16, Jesus tells us, “I will ask the Father, and He will give you another Advocate to be with you always.” This is basically saying “God the Son prays to God the Father that He might send God the Holy Spirit to you.” Jesus goes beyond this basic explanation of the Trinity to confirm to us that we are called to be one with Him. “I am in my Father, and you are in Me, and I in you.”

One of the Deacons, Philip, is preaching in the first reading from Acts. Bear in mind this is the Philip who was ordained a Deacon in Chapter 6 of Acts, not Philip the Apostle. He is in Samaria, a land which lies between Judea, the location of Jerusalem, and Galilee from where Jesus and all the 12 Apostles except for Judas originated. Most of us know from various Bible sources that the Samaritans were viewed as inferior by both the Galileans and the Judeans. Therefore, it is noteworthy that Deacon Philip is evangelizing there. It is also important to be aware that it was the Apostles Peter and John, who came and baptized the converts in Samaria. Just as with us at our Baptisms, these new Christians were filled with the Holy Spirit.

The second reading from Peter’s first letter goes back to a theme with which we should be familiar — that following the Lord is not easy and may involve suffering and discomfort. Peter may have been writing at a time that Christianity was in its beginning stages and persecution was not only possible, but probable. Nevertheless, Saint Peter’s message is just as apt for us today. If we truly follow our faith, and if we are willing to live it out in a way that others are aware of our faith, we, too, may run up against obstacles and even derision from those with whom we come in contact. Living the stewardship way of life is a good example of this. Being willing to share and to reach out to others is not something which is necessarily understood nor valued by our society. Peter (and Jesus in several instances) makes it clear that we must be prepared to defend our faith for “We must always be ready to give an explanation to anyone who asks you for a reason for your hope, but do it with gentleness and reverence.”

As pointed out previously, in the Gospel from John, Jesus calls our attention to the ongoing presence of the Holy Spirit (as that received by the Samaritans in the first reading, and the reason for the strength needed to fulfill Peter’s challenge in the second reading). We have often spoken about subtle meanings which may be lost in translation, but are revealed to us with a deeper understanding. Jesus tells us God is providing “another Advocate (Helper) to be with you always.” It may not seem too major but the word “another” was originally written in Greek “allen.” This does not just mean “another.” It means “another of the same kind,” not “another of a different kind.” Jesus is identifying that in the Holy Trinity, He and God and the Holy Spirit are one and the same. Finally, in an important and revealing statement, the Lord says, “Whoever has my commandments and observes them is the one who loves me.” Just as in a stewardship way of life, this indicates to us that we must love God, trust God, and obey God.