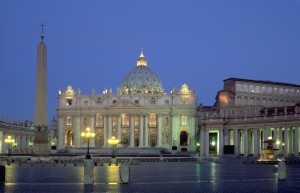 Catholics are familiar with the fact that the Church has structure. Not only is the organization of the Church carefully configured, but our Church structures – our buildings – stand as an ongoing testament to our faith and our love of God. One might say that the readings for this Fifth Sunday of Easter take the image of these edifices and place us carefully into them.

The first reading from Acts includes the establishment of the Permanent Diaconate (as we know it) as part of the Church organizational structure. More than that is communicated in that reading nonetheless. You will note the reference to Hellenists and Hebrews. It is valuable to know that both of these groups were Jewish. The Hebrews tended to be from Judea and follow those traditions while the Hellenists were located away from Jerusalem and followed Greek culture in most ways. It is also worth knowing that those first seven Deacons named in Acts all had Greek names. In other words, they were most likely Hellenists. The word “Deacon” finds its roots in the Greek word “diakanos” which means “servant.” This reading makes it clear to us, in anticipation of the other readings on this Sunday, that whoever we are and wherever we are from, we are an important part of the Church, and we are all called to serve.

In his letter, the second reading, St. Peter calls Jesus the “living stone.” Peter then makes it clear that we are all called to be “living stones” as well. Jesus, as the Cornerstone, is the foundation from which we build, but each of us must be prepared to place ourselves and our faith on this foundation of Christ to build and maintain the Church, the one body of which we are all a part. This is an element of the basic message of stewardship — that the Church, our parishes, our faith communities, find their strength in the ways we each use our gifts to serve the Church and one another. It is not that each of us standing alone, a stone by itself, does not have worth, but Peter wants us to accept that together we are stronger and more capable of doing God’s work more completely and effectively.

Today’s Gospel from John occurs during the Last Supper. Jesus is well aware of His impending Crucifixion. He is also conscious of the fact that this is the beginning of the series of events which will culminate with Him departing this earthly existence. You might say the Lord wishes to soften the blow of His exodus. He assures the Apostles that He will always be with them just as the Father is always with Him, in Him as He is in the Father.

That image of the Church and our faith being the House of God returns in the Lord’s reference to the fact that, “In my Father’s house there are many dwelling places.” In some Scriptural translations they use the word “mansion” in place of “dwelling place.” In Latin the word “mansio” means “dwelling.” For us as the building blocks on which the Church is built and thrives, the word “mansion” may have extra meaning. Truly the Father’s house to which Jesus refers is in Heaven. We serve and build structures and lives here on earth that are meaningful, but they pale in comparison to what is promised in Heaven. Jesus reminds us, “Amen, Amen, I say to you, whoever believes in Me will do the works that I do.”