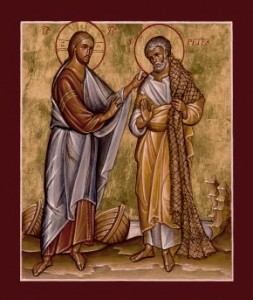 In the first two readings for this Fourth Sunday of Easter St. Peter continues to tell us what we must do to achieve holiness and to live out our Baptismal promises. Today is also designated as Good Shepherd Sunday in Catholic tradition.

In the first reading from Acts, Peter, who definitely has become the primary Apostle, begins to preach with his constant reminder of how Jesus Christ is Savior and one with God. If Peter felt any trepidation about being so forthright in such a public place and before such a large crowd, he gives no indication of it. When the people immediately reply, “What shall we do?” Peter responds in a way which should sound familiar. The first word of his answer is “Repent.” Those who know Scripture well will recall that when John the Baptist first preached, he began with “Repent” (Matthew 3:2). Jesus Himself began His ministry by saying “Repent” (Matthew 4:17).

The Greek word on which the translation “Repent” is based can just as accurately be rendered as “Change.” Peter adds “and let every one of you be baptized.” We often speak of the stewardship way of life. To live in that way requires conversion. In other words, we must “change” how we do things. An interesting sidelight to this first reading is that historians are relatively certain that the number of baptized followers of Christ at the time Peter is giving this sermon is most likely in the hundreds. Yet, it is reported that 3,000 were baptized on that day. The infant Church increased tremendously in membership that day.

The second reading from Peter’s first letter adds an important element for us to what we must do to be holy. He has preached that we need to change and be baptized. Now he adds to that what Jesus reminded us many times: Love one another. Admittedly, he may not say those exact words, but Peter reminds us that Christ suffered for us and offered His life in our behalf. No less is asked of us. Peter prompts us to understand that Jesus is our Good Shepherd and we are His flock. This reference is a cue for us to bear in mind what the Lord is about to say to us in the Gospel from John.

To fully understand the implication of what Jesus says in the Gospel we need an awareness of how shepherds and their flocks functioned in Jesus’ time. There were many shepherds who knew the sheep of their flock and the sheep knew them. At night multiple shepherds and flocks would gather at a large sheepfold. There was a gatekeeper there who would allow them entrance. When it was time to go back to the fields, each shepherd would call his sheep, perhaps by name, and they knew him and followed him.

That is the image which is most accurate about Jesus as our Good Shepherd. He knows each of us by name and has called each of us individually. In this instance in the Gospel Jesus is more than the shepherd; He is also the gatekeeper. We are called by name, but we must respond to that call, and we must recognize that it is through the gatekeeper, through Jesus, that we can gain access to heaven and to holiness.

Jesus is more than the shepherd and the doorkeeper though. He is also the door itself. In some cases there were sheepfolds in the fields used exclusively by a particular shepherd and his flock. After the sheep were inside for the night, the shepherd would literally lay across the door to protect them. That is Jesus to us; He is not only our shepherd and the one who controls entrance, He is the door itself. It is well to remember on this Fourth Sunday of Easter what the Lord first told us: “Repent, for the Kingdom of Heaven is at hand.”