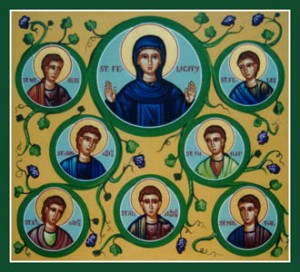 We are all familiar with the Scriptural statement, “Faith, Hope, and Love, but the greatest of these is love.” That might be considered to be a stewardship primer for the focus of our lives. The readings for this 32nd Sunday in Ordinary Time concentrate on the Hope aspect of that evocation.

Again, a historical perspective is helpful to deal with the first reading from 2 Maccabees. It is the second century before Christ and the Greek empire under Alexander the Great has been established. The Greek rulers attempted to suppress the practice of the Jewish religion, and there was a revolt. Maccabees is basically the history of this revolt.

This particular reading is the story of the seven brothers who were put to death for refusing to violate Jewish law. The theme is hope in salvation and resurrection. The stress is on the rewards which Heaven will hold and the guarantee of salvation for those of faith: “the King of the world will raise us up to live again forever.” The fact that there were seven brothers is significant. The number seven was considered sacred and occurs throughout Holy Scripture from the seven days of creation to Jesus instructing us to forgive “seventy times seven.” The number seven appears more than 700 times in the Bible, 54 times in the Book of Revelation alone. A central part of good stewardship is understanding Scripture.

In his letter to the Thessalonians Paul continues the emphasis on hope. “May our Lord Jesus Christ himself and God our Father, who has loved us and given us everlasting encouragement and good hope through his grace, encourage your hearts and strengthen them in every good deed and word.” This hope cannot be separated from stewardship. There is not only hope in salvation, but on this earth we must have hope in God’s love and grace. Stewardship people are positive people. It is as if the world around keeps emphasizing the idea of scarcity — there is never enough. However, our faith and our stewardship teach us that our God is a God of abundance. Returning to the concept of seven, God created for six days; He created and abundance, such that on the seventh day He rested. There was enough for all.

After the fall of communism, as the Church arose again in Eastern Europe, the Cathedral of St. Casimir in Vilnius, Lithuania was returned to being a church — the communists had converted it to a warehouse for storage. The Archbishop of Vilnius had encouraged people to bring their offerings to the first Mass. The people had little money so they arrived with fruits and vegetables and animals and family heirlooms. Theodore Cardinal McCarrick, Archbishop of Washington D.C., was present at that first Mass as he was the chair of the U.S. Bishops Committee on Eastern Europe. That first Mass occurred at the time the committee on stewardship was writing their Pastoral Letter Stewardship: A Disciple’s Response. When Cardinal McCarrick saw the people and their gifts, he says he began to weep. Upon his return he told Archbishop Tom Murphy, the chair of the Stewardship Committee, “Tom, I have seen stewardship first hand. It has everything to do with hope and plenty. May our people of faith never lose sight of that.” God is a God of plenty if we practice good stewardship.

The number seven emerges again in the Gospel from Luke as Jesus is confronted by the Sadducees with their question about the seven brothers. The Lord’s response makes clear that the questioners do not truly understand resurrection and salvation. Jesus’ point is that we are to have hope in the living God and that will answer all questions. Hope is central to our lives of stewardship. The late stewardship pioneer, Msgr. Thomas McGread, has called each Mass a stewardship banquet. Every Mass, every liturgy is a proclamation of hope.