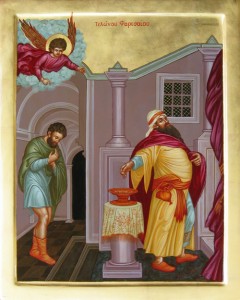 Quite frankly, the readings for this 30th Sunday in Ordinary Time parallel the lyrics of a popular hymn, The Lord Hears the Cry of the Poor, composed by one of the St. Louis Jesuits John Foley. His hymn begins “The Lord hears the cry of the poor. Blessed be the Lord.” It is actually based upon Psalm 34, which is, of course, the recommended Responsorial Psalm for this week. “The poor one cried out, and the Lord heard, and from all his distress He saved him.”

“The prayer of the lowly pierces the clouds.” The first reading from Sirach emphasizes both the power of prayer and particularly the prayer of the oppressed. Previously we have pointed out that the Book of Sirach, although part of Catholic and Episcopalian Bibles, is not part of Protestant or Jewish versions of the Old Testament. Yet, Sirach is one of the most exciting and clear Books in the entire Bible. As a sidelight, we might mention that it is one of the most mispronounced Books of the Bible as well. Ninety percent of scholars and Bible pronunciation guides recommend that it be articulated “Sigh-rack”, not “Sear-rack” as people are wont to say it.

The portion of Paul’s letter to Timothy which is the second reading for this week contains perhaps one of the most quoted statements Paul ever wrote: “I have competed well; I have finished the race; I have kept the faith.” For us as stewards we need to understand that what Paul is saying, both to Timothy, and to us, is that it is not just a race, but it is a relay. Paul is handing the baton to us. In a race, starting is always easier than finishing. Paul is emphasizing finishing. Are we prepared? Is our faith deep enough? Do we trust in the Lord’s assistance to help us reach the finish line (or to hand off the baton again).

Scholars and theologians do not agree on the number of Parables Jesus shared because they cannot agree on what a Parable is. According to one Catholic Encyclopedia there are 37 Parables in total. Based upon those Parables (some of which appear in Matthew, Mark, and Luke) there are 22 in Matthew, 9 in Mark, and 27 in Luke. The Parable of the Publican and the Pharisee, this week’s Gospel, only appears in Luke. The foundation of the message Jesus is sending us is that there are two ways to approach prayer — one is where we feel equal to God and another is where we feel subject to God. The Pharisee feels equal; he trusts in himself more than he trusts in God. His motivation for prayer is “appearance” — he thinks it is important for him to make an appearance at the Temple.

The Publican, on the other hand, comes to God filled with humility. He is praying because he needs to make a request of the Lord, a plea for mercy. The Pharisee, a proud man, is a rival to God. The Publican, a humble man, is subject to God. As stewards we are subject to God. One of the major pitfalls of living a stewardship life is self righteousness. That is why Jesus reminds us again how important it is to be unassuming in our approach to the Lord and in our approach to others through lives of stewardship.