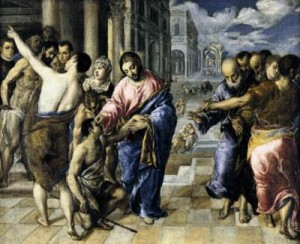 “Your faith has saved you.” With those words, Jesus looks at the Samaritan leper who returned to offer Him his deepest gratitude for being cured. He was the only one of 10 who not only seemed to realize from Whom the cure had come, but the importance of conveying his gratitude to Him.

Readings from Holy Scripture are almost always about faith, but the readings for this Sunday have a heavy dose of salvation as well.

The Second Book of Kings is one of the historical books of the Old Testament. There was a time when four Books of history in our Catholic Bible were only one book. In fact, First and Second Kings is still a combined book in the Hebrew Bible used by those of Jewish faith. For us as Catholics the four Books are First Kings, Second Kings, First Samuel, and Second Samuel.

Naaman, who is featured in today’s first readings, was a respected army commander in Syria. In those days Syria was considered dark and sinful, unlike Israel. And Naaman had a severe problem — he suffered from leprosy. What is described in Naaman’s cure is a harbinger of Jesus, of Baptism, and of salvation. There are two exigent ingredients for us in being faithful followers of Jesus, good stewards. The first is totally believing in the power of God. The second is being willing to humble ourselves in service to the Lord. Like Naaman, we may be hesitant or even reluctant to follow the Lord’s lead, but like Naaman the fruit of our faith is salvation and cleansing.

Paul’s letter to Timothy, the second reading, emphasizes and strengthens what Paul is trying to communicate to Timothy throughout the letter, and today’s reading as well. If we are loyal to Christ and if we follow Him explicitly, we can then find the salvation He offers us.

The Gospel story of the 10 lepers has a number of secondary implications. Most of us are aware that lepers were isolated from the general population because of the serious and contagious nature of the disease. We may not, nonetheless, be aware of the social repercussions. The popular culture of Jesus’ time believed that leprosy was a punishment for sin, a sign of God’s displeasure. Of course, we understand that is not the way God works.

Thus Jesus wants to cure these lepers, both as a sign of the power of faith and as a sign that their cleansing means more than disease, a sign that any sins had been wiped away. Jesus wishes to counter the culture that disease is a sign of sin; at the same time he wants to demonstrate the power of God. It is essential that we take note of the one who comes back to thank Jesus. It might be said that ingratitude is a sin. It is easy to be ungrateful; it is easy to think that our blessings are the result of our efforts without recognizing and giving credit to God. Stewardship appreciates that everything we are and everything we accomplish is done with God’s help and blessings.

We might say that “spiritual leprosy” is rampant in our society. To be disciples of Christ and to practice good stewardship requires us to seek cleansing through reconciliation and to show our gratefulness to God in prayer and in how we live our lives. It was the faith of the thankful leper which distinguished him. We need to aspire to that same level of faith.