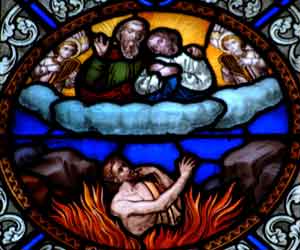 Chapter 2 of the United States Conference of Catholic Bishops’ pastoral letter, Stewardship: A Disciple’s Response, states: “Jesus is the supreme teacher of Christian stewardship, as He is of every other aspect of Christian life; and in Jesus’ teaching and life self-emptying is fundamental.” The readings for this 26th Sunday in Ordinary Time are applicable to the idea of “self-emptying.”

It is best to look at the first and second readings from juxtaposition. What is included in Amos is exactly opposite from what we find in 1st Timothy. Amos speaks of a people who might be typified by pride, vanity, greed, and pleasure seeking. It is a people who are oblivious to the troubles of others, a completely self-centered people — certainly not a self-emptying people.

Paul’s letter to Timothy (1 Timothy 6: 11-16) describes a path to holiness and living as a Christian which is the antithesis of Amos. St. Paul challenges Timothy and all who aspire to live lives of Christian stewardship to “pursue righteousness, devotion, faith, love, patience, and gentleness.” Paul advises the Christian faithful not to be overly concerned about the things of this world. In fact, as opposed to being self-centered, he challenges people to be God-centered, to view life through concern for others rather than self.

That is the sin of the rich man Jesus describes in the Gospel from Luke. Jesus does not say he achieved his riches in the wrong way; He does not say that he harmed the poor man Lazarus. His sins were that he provided only for himself. Although he did nothing wrong to Lazarus, he suffered the sin of omission by not caring for him in any way.

The same dilemma confronts each of us as we live our lives. Sometimes we feel as if we are doing right by doing no wrong. Stewardship, on the other hand, calls us to a deeper insight of life. Stewardship is a life of action, not a passive approach to living. Good stewards are always looking for the ways they can help others, the behavior that permits them to be Jesus to and for other people. The rich man pleads with the Lord to allow him to go back and tell his brothers the pitfalls of ignoring those around them, but it is too late.

It is never too late for us, nevertheless. It is never too late to get involved in a ministry at our parish which reaches out to those in need. It is never too late to take action through our communities and the many charities around us to have an impact on those who are poor, both in a real sense and in a spiritual sense. Toward the end of that same chapter from the stewardship pastoral letter the Bishops proclaim, “In Christ, God has entered fully into human life and history. For one who is Christ’s disciple there is no dichotomy, and surely no contradiction, between building the Kingdom, and serving human purposes as a steward does. These are aspects of one and the same reality — the reality called the Christian life.”