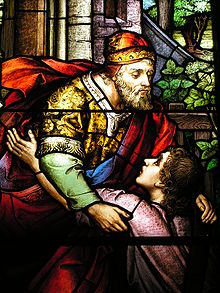 All the readings for this 24th Sunday in Ordinary Time concentrate on God’s mercy and forgiveness. From the first readings from Exodus, to the Gospel from Luke, the basic message is that God is a forgiving Father and His love for us is greater than anything else.

This forgiveness and love is paralleled by viewing ourselves, like the lost sheep, as being sometimes lost.  In the first reading from the Book of Exodus, Moses is on the mountaintop receiving the Ten Commandments. However, while he is gone, the Israelites become impatient; they have begun to question their faith. They fashion a Golden Calf which they begin to worship. It is at this point the reading begins as the Lord tells Moses to go down to his people, for He, the Lord, is about to punish them. In other words, they are lost. Nevertheless, Moses “implores” the Lord to have mercy and forgive them, which God does. It all points to one of the key aspects of stewardship — prayer. Prayer is powerful in moving God to have compassion, for the Lord is always ready to forgive.

The second reading from Paul’s First Letter to Timothy highlights Paul’s own struggles and conversion. In effect it is a prayer of gratitude on the part of St. Paul. Paul is humbled and grateful to God for the trust He has placed in him. In addition to prayer, conversion is an important part of stewardship. Paul is a living example of conversion, of the saving grace of God. Paul, too, was lost, but he has been found. Through stewardship we, too, can be found.

Like the sheep, the coin, and the son, we are all lost at times. But God loves us, looks for us, and welcomes us and rejoices with us when we are found, when we return. The Lord offers an important caution to us in the third parable or third part, the story of the Prodigal Son. This parable is as much about the older brother as it is about the lost brother. Remember whom Jesus was addressing — tax collectors and Pharisees. Of course, Jesus is also addressing us. As much as He expects us to be loving and caring and good stewards of our many gifts, Jesus also does not expect us to feel morally superior to others. In fact, when we start to think that we are in any way superior because of our own perceived holiness, we have lost —  just as the older brother did — the ability to have mercy and to love as we are supposed to.