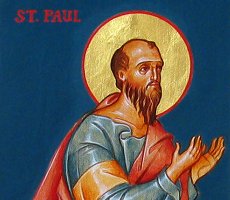 God’s mercy is evident throughout today’s readings. Most of us are familiar with the story of Sodom and Gomorrah. Although the emphasis is often on the evil nature of those two cities, the lesson for us is one of God’s kindness, mercy, and love. “For the sake of those ten I will not destroy it.”

Like most of the gifts we receive from the Lord, His love is given freely and abundantly, whether we deserve it or not. Our late stewardship mentor Msgr. Thomas McGread, upon seeing a poster on a parish wall which declared “God loves a cheerful giver” said, “We must not forget God loves an uncheerful giver, too.”

In spite of Abraham’s insistence in asking God whether he could find forgiveness for the people of the cities of Sodom and Gomorrah, the Lord consistently replies that if there are any innocent people in the city He will spare all, including those who are evil.

In his letter to the Colossians (today’s second reading) St. Paul trumpets two important facts: first, we are one with God; and, second, through His death on the Cross, Jesus joined with us so that redemption is possible for us. In his letter Paul uses the word “obliterated” which sometimes is translated as “cancelled” so that it would read, “He (Jesus) brought you to life along with him, having forgiven us all our transgressions, cancelling the bond against us.” In ancient times many documents were written on wax or soft clay. In this case it is as if there is a list of our sins, and to cancel them the Lord took a soft stylus and scraped it across our sins, thus obliterating them all.

It has to do with the power of prayer. It does not mean that every prayer will be answered, but it does mean that we need to pray, and we need to ask God to be open to us. People frequently tend to think of prayer in terms of prayers of petition. We often appeal to God to help us or to help someone we love. Stewardship, on the other hand, concentrates on prayers of thanksgiving. That does not mean that we can never pray for something, ask for something, but it does have to do with our priorities.

A stewardship way of life focuses on what we have been given, not necessarily on what we “want.” It has been said that there are only two prayers…”Please” and “Thanks.” For the steward, the “thanks” prayer always comes first, with the “please” prayer following.