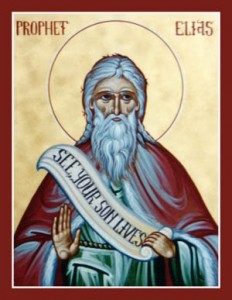 There are certainly times when Scripture readings recount a story that is difficult to interpret or understand. For many of us, today’s first reading and Gospel reading fall into that category.

We need some historical perspective to truly understand the first reading from 1 Kings, but once we grasp that viewpoint, there is a solid stewardship message. Elijah, like Moses and the Apostles, has been called by God to serve Him. The two books of Kings recount the history of Israel from Solomon, through the division of the kingdom into North and South, through the fall of the two kingdoms. The history shows that the southern kingdom was served by good kings, but the northern kingdom consistently had evil kings as far as the Lord was concerned.

Elijah and his follower Elisha served in the northern kingdom. Although there are some subtle pieces of information in today’s reading, the base of it is Elijah with the intercession of God calling Elisha to follow him. Worth noting are the facts that Elisha is plowing with 12 oxen, an indication of wealth because of the number, and the fact that Elisha is working in the field, although the seeming wealth might indicate it is not necessary for him to do so. The cloak or  “mantle” thrown over Elisha by Elijah is symbolic of him being called to be a prophet. God calls us in a similar way. Stewardship calls for us to assume the mantle of God, to follow Him, and to serve him. Like Elisha we have a vocation — the most important aspect of it is to be a disciple and a steward.

St. Paul, in his letter to the Galatians (second reading), cites what is our most basic motivation for being good stewards: “…serve one another through love…You shall love your neighbor as yourself.” Paul speaks of liberty — this is not political liberty as we use the term here in the United States. This is the liberty which can only be granted by God — the liberty which Jesus purchased for us by His death on the Cross. Christ’s liberty is not given us by any law, but freely as a gift. To Paul, the law is a “yoke of slavery.” We are called to a higher appreciation and understanding.

In Luke’s Gospel, we join Jesus on His final journey to Jerusalem, His passage that leads Him to His death and resurrection. The trek itself is a series of stories, sometimes not connected by anything but the trip itself. The reading takes us through Samaria, where Jesus, because He is traveling to Jerusalem, is rejected. The conflict between the Samaritans and the Jews is well documented and referred to many times in Scripture (The Good Samaritan, for example). It also provides a hidden connection to the first reading as the Samaritans were descended from people of the northern kingdom, while the Jews were descended from people of the southern kingdom.

The stewardship key to this Gospel nonetheless is Jesus’ call to three different persons to “follow me.” In the first reading, Elisha receives the call from Elijah, but responds basically “Yes, I will follow you, but first let me say goodbye to my mother and father.” The three people included in the Gospel respond to Jesus the same way, “Yes, I will follow you, but first let me…” As mentioned, just as we are called to some vocation, the basis of our calling is to follow Jesus — to be a disciple of the Lord. As harsh as it may seem, there are no excuses for not being a disciple. That is the point of the Gospel. Our call to discipleship, to stewardship, is not timeless; it is urgent and it is immediate. It is something we must do right now.