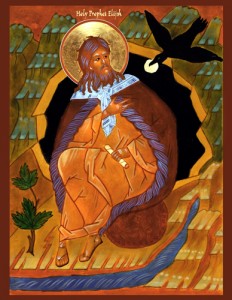 There are two important stewardship messages included in today’s readings. The first is the idea of calling; and the second is the objective of discipleship. These are reflected in the title of the U. S. Bishops’ Pastoral Letter on Stewardship: Stewardship: A Disciple’s Response.

Although it is symbolic in many ways, and thus may not be completely clear to us, the first reading from 1 Kings reflects that notion of being called. How does Elijah call Elisha? He does not speak, but he throws a mantle over him. We need to understand that this mantle, the cloak, was originally written adderet. There were three types of cloaks, but the adderet was the sign of a prophet. God has gifted each of us, and He has called each of us. Just as Elisha was called and given the gift of prophecy, we are each called and given gifts. Stewardship is what we do with those gifts.

In the Gospel from Luke Jesus calls each of us to discipleship. The call is relatively simple, just “Follow me.” It is, of course, a call to discipleship. As the Bishops strongly implied in their stewardship pastoral letter, stewardship is our response to that call. As followers of Christ, we are God’s representatives. We are called to ministry according to the gifts each of us has received.