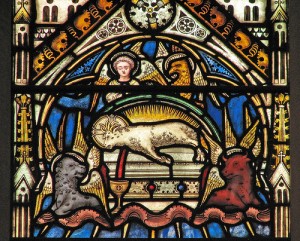 “Feed my sheep.” That was the Lord’s instruction to Peter when Jesus appeared for the third time near the Sea of Tiberius (Note that the Sea of Galilee had numerous names, including Lake Tiberius. It is 64 square miles in size and 145 feet deep.). Of course, He was saying much more than that, not only to Peter, but also to all of us.

The readings for this Third Sunday of Easter are filled with how we as Christian stewards are supposed to live — how we are to respond to Jesus’ call to discipleship. The first reading from the Acts of the Apostles finds Peter, John, and the others called before the Sanhedrin to answer the charge that they continue to spread the Word when this has been forbidden. The Sanhedrin was the highest court, the equivalent of our U.S. Supreme Court.

This was not the first time they had been called before this high court. Chapters 4 and 5 in Acts recount how they were tried and how the court ordered them to quit preaching and healing in Jesus’ name. In the end, they were whipped and then released, but Acts 5:41 tells us they departed the court in “joy” because they had been found “worthy” to suffer in Jesus’ name.

The word “worthy” also appears in the second reading from Revelations. John describes Jesus, “Worthy is the Lamb that was slain…” Jesus is referred to as the “Lamb” or the “Lamb of God” 28 times in the Book of Revelations. This is another case of how closely connected the readings can become — from the worthiness of the Apostles in the first reading to the worthiness of the Lamb of God in the second to Jesus’ admonition to “Feed my sheep” in the Gospel.

The Gospel of John recounts Jesus’ third appearance to the Apostles, and the exchange between the Lord and St. Peter echoes down through the centuries to us today. Three times Jesus enjoins Peter — the first time to “Feed my lambs,” then to “Tend my sheep,” and finally to “Feed my sheep.” Most scholars and theologians have concluded that this was Christ’s command to Peter to create the Church — to establish a formal means through which the flock, the sheep, the people could be fed through the gift and power of the Eucharist. Through the Church the sheep are nourished also with the Word of God. This is particularly significant to us at this time as we Catholics now have a new Shepherd, Pope Francis: the 265th Pope from St. Peter to now.

For us as stewards, there are some strong messages as to what we are supposed to do. The first reading includes the response by Peter to the Sanhedrin that  “We are witnesses of these things.” In other words, Peter is making it clear that he and the others are not about to stop preaching and practicing their faith. And in fact they did not. The next verse after the first reading in Acts proclaims “They never stopped teaching and proclaiming the good news of Jesus the Messiah.” We are called to the same kind of stewardship. Our lives, each and every day, in our homes, in the places we work, and in our communities should proclaim by how we live them — “We are witnesses to Christ.” Stewardship as a way of life helps us be “worthy.”