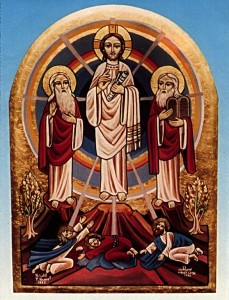 Today’s readings make a challenge to us — they ask us to look beyond this life and this world. Of course, Jesus did that often in His ministry. In relation to His own life and His time on earth, He was fond of saying something similar to what He said in John 16:36, “My Kingdom is not of this world.”

In the first reading from Genesis, God calls on Abram to look beyond his present existence. God asks him to look at the Heavens and count the stars. Naturally, that is virtually impossible. Then God speaks of what is to come — the generations who will follow — they will be like the stars, beyond Abram’s comprehension and his ability to count them.

St. Paul, in his letter to the Philippians, the second reading, states, “brothers and sisters, our citizenship is in heaven.” The English romantic poet William Wordsworth wrote a sonnet titled The World Is Too Much with Us. Although Wordsworth was not referring to us in relation to heavenly life, he did capture the quandary of our earthly existence — that is, as Paul says, we are citizens of another world — a heavenly world — but we are so deeply embedded in our existence here that we seldom are able to truly see it or to appreciate that it is there.

As is often the case in Scripture, all of the ideas about Heaven and life in Heaven are coalesced in the Gospel from Luke, the recounting of the Transfiguration. The Transfiguration has been called “the culminating point in Christ’s ministry on earth” — with His Baptism as the beginning point and His Ascension as the end point. During the Transfiguration His body and His face became dazzling — so bright that it might almost blind someone looking upon Him. It was His Divinity showing through.

Peter, who can be very much like us, wanted to stay there on the mountain top, build some tents, and create a permanent experience. But permanence is only in Heaven. Heaven is eternity. Stewardship calls us to recognize that — to strive to be as holy as we can be, and to serve as unconditionally as we possibly can. Nevertheless, what should be our driving force — our true comprehension — is that for us, just as for Jesus, our Kingdom is really not of this world. People who embrace stewardship as a way of life live with an awareness of the present and the future, of both time and eternity.