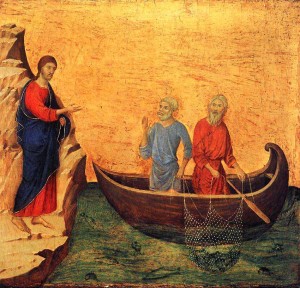 Each of the readings for the Fifth Sunday in Ordinary Time makes reference to people being “called.” Of course, each of us is called by God to be a disciple. The challenge for us is to hear that call, understand it, and then to respond to it with action.

The United States Bishops, in their Pastoral Letter on Stewardship  —  Stewardship: A Disciple’s Response — say the following about our personal vocations: “Jesus calls us, as his disciples, to a new way of life — the Christian way of life — of which stewardship is part. But Jesus does not call us as nameless people in a faceless crowd. He calls us individually, by name. Each one of us — clergy, religious, lay person; married, single; adult, child — has a personal vocation. God intends each one of us to play a unique role in carrying out the divine plan. The challenge, then, is to understand our role — our vocation — and to respond generously to this call from God. Christian vocation entails the practice of stewardship. In addition, Christ calls each of us to be stewards of our personal vocations, which we receive from God.”

The first reading from Isaiah reminds us of a hymn based upon that reading that most Catholics have sung and heard for the past few decades — “Here I am Lord,” composed by Dan Schutte, one of a group of Jesuit Brothers known as the St. Louis Jesuits, because they worked together and wrote hymns when they were all at the Jesuit St. Louis University. The hymn portrays Isaiah’s response to God calling him. The lyrics in the refrain, known to many, are “Here I am Lord. It is I lord. I have heard you calling in the night. I will go, Lord, where you lead me. I will hold your people in my heart.”

Paul’s first letter to the Corinthians, from which the second reading is taken, reflects on his personal calling to be an apostle. As a sidelight, it is well to note the difference between an apostle and a disciple. Both have Greek derivations, with apostle meaning “messenger” and disciple meaning “student.” In the Gospels of Matthew and John the word “apostle” is not even used — John, for example merely identifies the 12 Apostles as “The Twelve.” Paul’s, point, however, is that we are called, just as he was, and we have a holy duty to respond.

The Gospel from Luke is a story known popularly — of how Jesus told Peter and James and John to go out in Peter’s boat and fish again, even though they had caught nothing previously. The catch was enormous and it was a changing point in the vocations of those men. They were fishermen, and had probably been fishermen since they were boys. Fishing was their vocation, but Jesus called them to something higher — to be “fishers of men,” and they responded by changing vocations from fishermen to apostles — messengers.

Some of us, like Isaiah, are called to vocations of discipleship which function parallel to our life’s vocation, our jobs. Others, like Peter, are called to lifetime vocations — holy orders. The point is not which vocation we follow — it is that as good stewards we recognize we have a vocation — a role — in building the Kingdom of God. Are we prepared and are we responding in the way we should: “Here I am Lord… I will go, Lord, where you lead me.”