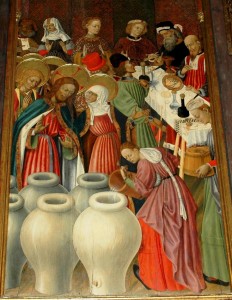 Today’s Gospel from John includes the story of the Miracle at the Wedding Feast in Cana. The wedding feast in Cana is always the Gospel reading for this Sunday because it is there that Christ is revealed. The last sentence in John’s Gospel (Jn 2:11) is “Jesus did this as the beginning of his signs at Cana in Galilee and so revealed his glory, and his disciples began to believe in him.” This is his first sign, and as stated, it “revealed his glory.” For His disciples, you might say this was the “clincher,” and they “began to believe in him.”

Although today is the Second Sunday in Ordinary time, “ordinary” does not mean “commonplace.” In its usage by the Church it stems from two Latin words — ordinalis, which means numbers listed in order, and ordo which means order. Ordinary Time is merely a reminder to us that the Church has order, and that we are expected to approach our faith in an ordered and consistent way.

In the second reading from Paul’s letter to the Corinthians, Paul explains and defines what stewardship really is. “There are different kinds of spiritual gifts but the same Spirit; there are different forms of service but the same Lord; there are different workings but the same God who produces all of them in everyone. To each individual the manifestation of the Spirit is given for some benefit.”  Each of us is gifted in some special way. And all of our gifts are to be used to build the Kingdom of God. If we truly believe, we need to live out our lives in the way once described by the late Archbishop Thomas Murphy, who said, “We all possess certain talents and gifts which are unique only to us. You already have what you need to start living an extraordinary life. It is up to you to let your light shine.”