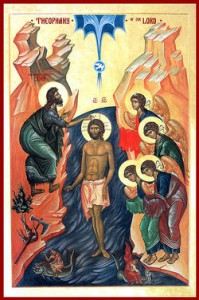 Today — the Baptism of the Lord — is also the First Sunday in Ordinary Time. Because of the placement of this feast day, many have the mistaken impression that the Baptism of the Lord is in this timeframe because it is so close to the birth of Jesus. But in reality, this feast has moved during the lifetimes of many people. Originally it was celebrated in conjunction with the Epiphany. In 1955 Pope Pius XII instituted a separate liturgical celebration of the Baptism feast. Five years later, John XXIII designated January 13 as the date to celebrate the feast. Only 14 years later, Paul VI proclaimed that we would celebrate this feast on the Sunday after Epiphany Sunday.

Our readings for this Feast of Christ’s Baptism all deal with these revelations — these theophanies. However, His Baptism itself is significant because of the Trinity, which is revealed in the final verses of today’s Gospel:  “After all the people had been baptized and Jesus also had been baptized and was praying, heaven was opened and the Holy Spirit descended upon him in bodily form like a dove. And a voice came from heaven, “You are my beloved Son; with you I am well pleased.” Luke 3:21-22. Simply put, Jesus the Son of God is physically present for the Baptism; the Holy Spirit descends upon Jesus in the form of a dove; and God the Father speaks from Heaven proclaiming both His joy and the fact that Jesus is indeed His Son.

Jesus’ Baptism is even more than a revelation to us. It is the example and the foreshadowing of our own baptisms. Why did the Lord, sinless and pure, need to be baptized? He showed us the way. If He, Who had no need of this purifying act, humbly subjected Himself to it, then we, most in need of redemption, can recognize both the importance of this sacrament, as well as recognizing how we are freed from darkness. Jesus was not Baptized because He needed it, but because we needed it.

The Baptism of the Lord marks the official end of Christmas. Most churches do not dismantle their Christmas decorations until after this Feast Day. As Catholics perhaps we, too, should follow that example — to let everyone know that Christmas does not end with Christmas Day, but with the culmination of our understanding as to Who Christ is.