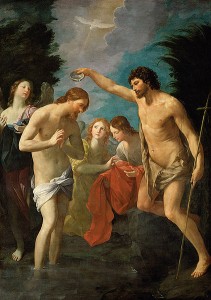 Today — the Baptism of the Lord—is also the First Sunday in Ordinary Time. Jesus’ Baptism Feast is placed here by the Church because it is an important part of what has been revealed and taught to us during Christmas.

Jesus’ Baptism is even more than a revelation to us. If He, Who had no need of this purifying act, humbly subjected Himself to it, then we, most in need of redemption, can recognize both the importance of this sacrament, as well as recognizing how we are freed from darkness. Jesus was not Baptized because He needed it, but because we needed it.

The Baptism of the Lord marks the official end of Christmas. Most churches do not dismantle their Christmas decorations until after this Feast Day. As Catholics perhaps we, too, should follow that example — to let everyone know that Christmas does not end with Christmas Day, but with the culmination of our understanding as to Who Christ is.