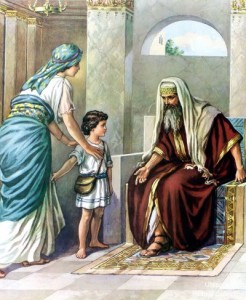 In all three of this Sunday’s readings, we hear about discipleship. God reveals Himself to man, and man responds to God’s revelation by following Him – giving up His old life and living for the Lord.

In the first reading from First Samuel, we hear God calling out to Samuel, who “was not familiar with the Lord, because the Lord had not revealed anything to Him as yet.” So, Samuel ran to Eli, believing the voice he heard calling him to be Eli’s. Finally, upon the second calling, Eli realized what was happening, and told Samuel that the Lord’s call required a response. “…If you are called, reply, ‘Speak Lord, for your servant is listening.’”

Samuel did just that, and the writer tells us, “Samuel grew up and the Lord was with him always, not permitting any word of his to be without effect.” Samuel gave his life to the Lord, and the Lord guided his steps and ultimately used Samuel to proclaim Him to the nations.

In the Gospel reading from John, we hear a similar story. Here, we see Christ calling His disciples, and, like the Lord used Eli to reveal Himself to Samuel, Jesus reveals Himself to two disciples using John the Baptist.

John proclaims, “Behold the Lamb of God,” and at that moment, the two disciples see who Jesus is and they begin to follow Him.

What’s more, the Gospel tells us that Andrew found his brother Simon and told him, “We have found the Messiah.” Then, he brought him to Jesus, garnering yet another disciple for Christ. Simon responded to that revelation in the same way His brother and the other disciple had – he began to follow the Lord and change his life accordingly.

Christ calls each one of us to be His disciples. Just like He called Samuel and Andrew and Simon, He calls us today. Sure, most of us will not hear His voice audibly calling or will see Him walking down the road beckoning to us, but He calls us just the same. Tugging on our hearts, He calls us to Himself. We were made to live for Him, so, even though we don’t see him or hear Him in the traditional way, we are drawn to Him just the same.

Truly, like St. Augustine of Hippo proclaimed in His professions, “Our hearts are restless, O Lord, until they rest in thee.”

In addition, the Lord reveals Himself to us in a multitude of ways. He shows forth His goodness and His beauty in nature. He reveals Himself to us through the goodness of others, and, in much the same way as He did with Samuel and the first Christian disciples, the Lord uses others as His instruments to call us to Himself.  It is our duty to respond to His call, to give Him our lives, and, like Samuel, Andrew, Simon and he disciple who is unnamed in this gospel passage do, to choose to live our lives for Him. We offer Him ourselves, our time, our talents and our treasure, and, through the way we live our lives “avoiding immorality,” and “glorifying God in our bodies, as Paul exhorts the Corinthians to do, really by committing to live for God, to glorify Him in all we do – at home, at church, at work and elsewhere – we serve as His instruments, calling others to follow Him, just like Eli and John the Baptist have done.

Let us all take ownership of our responsibilities as Christian disciples, and devote ourselves to live for Christ, to follow Him and glorify Him in all we do, bearing witness to others of the wonderful God we serve and calling others to live for Him as well.