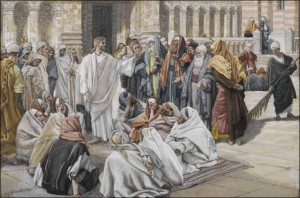 It must have startled the first who heard or read the portion of Isaiah’s prophecy read today.  It seems startling to us even now.  One of the hallmarks of the Hebrew religion was its insistence of their distinctiveness.  They, alone of all the nations, worshiped the Lord, who is the only true God.  He had chosen them and revealed himself to them, so they had a unique position in the world.  Even though he had punished them with exile because of their unfaithfulness to the covenant, they were still God’s “Chosen People,” separated from the pagan gentiles around them.

But now one of the Jewish prophets was proclaiming that God not only viewed the Persian emperor favorably, but even considered Cyrus his anointed one, his Messiah.  To use the Greek derivative, Cyrus was the Lord’s Christ.  How could that be?  Cyrus did not even worship the God of the Jews or know who they worshipped.  And Christians know that Jesus of Nazareth is the Christ, the Son of God.  It just doesn’t sound right to refer to Cyrus in such terms.

The reason for such a designation for Cyrus is that even without any knowledge of the fact, he was serving as God’s agent for the Lord’s own purposes.  In his thirst for military conquest, Cyrus was carrying out God’s will by defeating the Babylonian empire.  The Jews had been punished enough, and the Lord was restoring them to their homeland so they could rebuild Jerusalem with its Temple.  For unlike the Babylonians, who deported conquered peoples from their native places, the Persians allowed their subject nations to continue their own customs and worship and return home, if they had been displaced.

This Reading from Isaiah is paired with the Gospel because they both deal with the relations between religion and government, what we usually term “Church and State.”  There has often been conflict between them, but both have their place in the Christian life.  The conflict comes when each wants to expand its influence into the sphere of the other.

Christianity has flourished under many different political systems, both monarchical and democratic.  Jesus himself recognized that both the Church and the state have their place in a well-ordered human society, and all authority ultimately comes from God.  There are some things that are Caesar’s, just as there are some things that are God’s.  But governments tend to seek ever more power, so they need to be kept in check by Christian principles.  “Every society’s judgments and conduct reflect a vision of man and his destiny. Without the light the Gospel sheds on God and man, societies easily become totalitarian” (Catechism of the Catholic Church, 2257).

As stewards, Christians are called to serve both within the Church and also for the wider society.  As we contemplate where to use our gifts, we need to evaluate what we do best.  We should never neglect the worship of God, but for many people our stewardship of talent means undertaking ministries in the community in which we live, and even beyond, not just within our parish family.

The Pharisees were trying to trick Jesus with their question on taxation.  But he gave an answer that would still serve us well.  It’s not “either/or,” it’s “both/and.”  For God works through the political processes of the nations of the world as well as in his Church.  In this way a modern-day Cyrus can still be serving God even though his intentions are only his own glorification and that of his nation.