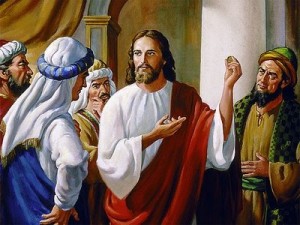 People who think they’re only serving themselves can actually be carrying out God’s will despite themselves.  So it was with Cyrus the Great, the Persian emperor.  His military conquests were for his glory, he thought, but the Lord used him to restore the Jews, the Chosen People, to their homes in Palestine.  He allowed their return after he conquered the Babylonians, who had taken the Jews into captivity.  Isaiah even referred to him as God’s anointed, for he was serving God’s purposes.

This reminds us that God is the one who gives authority to governments, as well as to the Church, and that each has its sphere of responsibility for our welfare.  The problem is that governments often seek to expand their powers in ways that are tyrannical rather than beneficial.  That’s why the Church’s witness is needed so that we can return to Caesar what is his, as well as return to God what is God’s.

But it also means that as stewards we are responsible to share our gifts and serve the wider community beyond the parish wall as well as worship and serve within the Church.  Both are needed for a healthy society.  God’s care extends to all aspects of our human life.