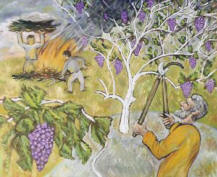 If there’s one thing certain about that day at the vineyard, it’s that everyone was surprised when evening came and the owner began to pay the workers.  The surprise was not that they were paid – the Law of Moses required hired laborers to be paid daily (Lev 19:13; Dt 24:14-15) – but in the amount.

The astonishment came because those who had been employed at the very end of the day and had worked only one hour received a whole day’s wages.  Those who had labored the whole day expected more, but then they received the same amount.  They felt cheated!  Their indignation must have been deflated a little when the owner of the vineyard pointed out they had been paid the entire amount their contracts called for.

Of course it seems unfair that those who worked the entire day got paid no more than those who had worked only a part of the day, or even just a little bit.  But the owner was paying those hired first what they would normally earn for a day’s labor.  He had named the wage at the beginning of the day, and they had agreed to it.  Those who came later had been promised what was “just,” and they expected only a portion of a whole day’s pay.  Those hired at the very end, with only one hour before the workday was over, were probably expecting only a few small coins, but it would show that their willingness to wait for employment was not totally wasted.  They must have been equally astonished when they received payment for a whole day’s work.

This Parable of the Workers in the Vineyard must have startled the hearers as well.  But reflecting on the parable enables us to understand the point Jesus was making.  This parable is really not about the workers.  It’s about the owner of the vineyard, who pays all the workers everything they are due, and often even more.  He’s more than fair; he’s generous!

We frequently contrast justice and mercy.  We humans usually consider them to be contradictory.  We tend to hope for justice for others, but mercy for ourselves.  Christian theologians point out that God is both perfectly just and perfectly merciful in a way that is impossible for us, limited creatures that we are.

This parable illustrates God’s mercy, God’s generosity.  He gives his workers all that is due, and even more.  One application of this truth is God’s gift of eternal life in heaven, in his very presence.  It’s the goal of our life here on earth.  There are those who have known, loved, and served him their whole lives.  They correspond to those who worked the whole day in the vineyard.  They receive the promised gift.

But those who come to know God later in life, or even in old age, are like those who worked in the vineyard only a short time.  God in his generosity gives them eternal life as well.  Truly, as the prophet Isaiah wrote, “For my thoughts are not your thoughts, nor are your ways my ways, says the Lord.”

Our response to God’s generosity should be one of gratitude for his mercy and generosity.  And our thankfulness to God for his merciful treatment of us should be demonstrated as we devote a portion of our time, talent, and treasure to his service and to his glory.