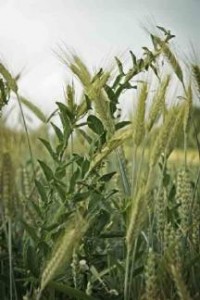 Maybe it’s due to our own sinful nature, but we usually associate great power with the ability to satisfy our own goals. When we see power in action in the movies or television shows, it’s usually being used to take revenge on other people or to force them to do the will of the powerful person

That is what’s so startling about the image of God presented in this Sunday’s readings. The First Reading from Wisdom is very clear. God is all-powerful; he is “master of might.” And, yet, his character is not the sort that imposes his will on others for his own pleasure. He treats his creatures with patience, lenience, and kindness. He rebukes those who respond to him with contempt but has mercy on other sinners, so they have an opportunity to repent for their sins.

The same image is presented in the first parable in the Gospel, the Parable of the Weeds among the Wheat. A farmer knows that in a field sown thickly, pulling up weeds by the roots will also disturb the roots of the desirable plants, so they too will die. Better to wait until the harvest, and then separate the weeds from the wheat when it’s through growing.

So it is in the Kingdom of God. There will always be sinners as well as saints among the members of the Church. If God, working through the clergy and other duly appointed leaders, tries to remove all in error or sin from the Church, the whole company of the Faithful will be damaged. It is indeed necessary to remove some dangerous and disruptive persons who are causing great harm, but for most cases, it’s better to allow everyone to remain. It may be that many will come to repentance, and in any case, God will separate the wheat from the weeds at the Last Judgment.

The other two parables, the Mustard Seed and the Yeast, make a different but related point. It is different, because they use different images for the Kingdom of God. Both the mustard seed and the yeast added to dough are small, but they grow and have a bigger impact than their beginnings would suggest. So it is with God’s Kingdom, which grows and permeates society, inviting everyone to come in. Like a plant’s gradual growth or the penetration of yeast through dough, God’s power allows him to be patient with people while his grace works in human history.

Our gratitude to God for his patience with us, refusing to reject us because of our sin and offering us an opportunity for repentance, calls for a response on our part. Grateful servants respond by offering what we have – the time, the talent, and the treasure entrusted to us – back to him, an offering ever more freely given as we grow in faith.