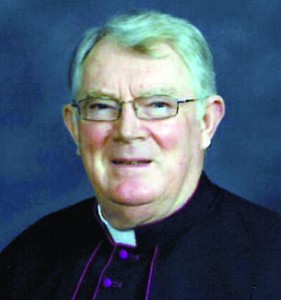 My own story of involvement in stewardship began in my younger years growing up in Ireland. My mom and dad both lived out stewardship in our parish, but, of course, nobody called it such back then. One simply did what was expected in taking care of the parish. Even so, it wasn’t without some real wrinkles, which later caused me great grief and concern.

The way stewardship worked back in my father’s time was very simple and undefined. Each year at harvest time, my dad would bring his sack of potatoes to the parish priest as part of his gift to the upkeep of the pastor. He would do likewise with the newly harvested turf (he saved peat for the fire). On occasion, he was known to steal one of mother’s hens or turkeys, (mother called him “The Fox”) and bring it to the priest’s house. When grass and shrubs were to be trimmed, or cleaning was needed in the parish hall, the parish priest would ask the men of the parish to come and do this for the church. Dad and my brothers were always part of that effort.  When dinners or events were planned for the hall, mother was always involved in that. That was how “time” and “talent” was practiced then.

The part that caused me to wonder then, and gave me grief later, had to do with how they managed the “treasure” part.

I can remember very vividly one Sunday morning at the breakfast table when Mom reminded Dad of a collection that was to take place that Sunday at our church. Dad took out his wallet and placed two pounds on the table (the equivalent of $6). This was a lot of money for our family.  Mother reminded Dad of the work on the church roof. Dad paused with an obvious painful look on his face, and said we must also buy shoes and clothes for the lads going back to school. With that, he opened his wallet again and placed another pound on the table. What struck me was how much was expected from one who was considered a poor man.

Years later, I’m now a priest and pastor needing money to repair our church (at the time, I was at Sacred Heart in Savannah, Ga.), and, now, I was the priest needing to do the asking.  I could see many people just like my dad who wondered and worried what God expected and wondered how were they to fulfill their obligation? At that time, for Catholics, the only defined obligation was through the Sixth Precept of the Church: “one was to give to the support of their pastors.” Nowhere was it even stated how that support was to be measured. During those early years of my priesthood, I felt very uncomfortable asking people for money. It was some years later that I heard a priest speak about stewardship.

In the ensuing 25-plus years, I have tried to live and practice stewardship as a way of life by offering my gifts of Time, Talent and Treasure back to the Church. I also do my best to live out what renowned pastor and stewardship pioneer, Msgr. Thomas McGread, calls the Four Pillars of Parish Stewardship: Hospitality, Prayer, Formation and Service.

At St. Mary on the Hill in Augusta, Ga. — where I was for 20 years before my current assignment at St. Peter the Apostle in Savannah — this means the living out of our discipleship becomes a total way of life for the parish. People’s involvement in the ministries of the parish flourished.  Perpetual Adoration and attendance at Sunday Masses were obvious outgrowths of this commitment. The parish’s commitment to tithing was exemplified in the fact that all of the parish’s programs – youth, seniors, religious education, music, CCD, and school, building and renovation – were all supported by the gifts of the people in the offertory.  There were no second collections, except those that were mandated by the Bishop, and the parish itself tithed to needs beyond the parish.

What I have learned in all of this is simply this: “God cannot be outdone in generosity.”