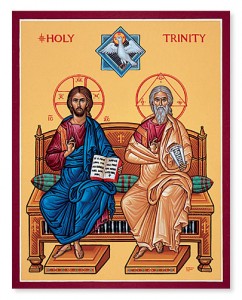 The Solemnity of the Most Holy Trinity, usually shortened to Trinity Sunday, comes each year a week after Pentecost. With the coming of the Holy Spirit, God’s revelation of himself was complete. It is the one feast that celebrates God’s own divine being – the others all celebrate historical events – Jesus’ Birth or Transfiguration, for example.

The apostles and the other first Christians were Jewish, like Jesus himself, and held fast to the Old Testament revelation that there is only one God. But they also came to know that Jesus was more than just an amazing leader. They realized that he was God in human form, and that realization was sealed by his Resurrection. And when the Holy Spirit came upon them after the Ascension, they recognized that God was still working among them, even though Jesus had gone to heaven.There had been hints of the Trinity throughout Jesus’ earthly ministry. He had referred to God as his Father, with whom he is united but still distinct. He had taught about the Holy Spirit, who would be with his followers as a personal agent, not just as a force. The union yet with distinctions was clearly in evidence at Jesus’ Baptism, when the Father announced that Jesus is his Son, and the Holy Spirit descended to strengthen him.

This truth that God exists as Trinity is one that can be known only by revelation, for it is beyond unaided human reason. Although it took several centuries of theological reflection for the Church to come to define the doctrine, a dawning understanding of God as Trinity can be found throughout the New Testament in passages such as the conclusion of today’s Second Reading, “The grace of the Lord Jesus Christ and the love of God and the fellowship of the Holy Spirit be with all of you” (2 Cor 13:13). Indeed, so striking is this expression it is one of the greetings used by a priest at Mass.

However, Christians find we cannot separate God’s essence from his nature. In the First Reading from Exodus, God at Mount Sinai declares to Moses that he is “a merciful and gracious God, slow to anger and rich in kindness and fidelity.”  And then today’s Gospel begins with the best-loved verse in the New Testament: “God so loved the world that he gave his only Son.”

That’s where we find the application to our own lives. Our Christian living is directed toward growing to becoming to more like God in character as we mature in faith. We’re to become more merciful and gracious to those around us, and so forth.

But above all, “God so loved … that he gave….”  God’s nature is to love, and love results in giving. We are to give, not once but continually, of our time, our talent, and our treasure. That doesn’t mean that we don’t retain enough to provide for our own families, but our question should be “How much I can give and still be responsible?”, not “How little can I give and still make it into heaven?”

There’s a story that as a man left his parish one Sunday morning, he grumbled to the pastor, “’Give …give …give.’ That’s all I ever here about at Church.”  The pastor thought a moment and replied, “Wow, that’s the best description of the Christian life I’ve ever heard!”  Each of us needs to ask, “How am I growing to be more like the God I worship, the God whose nature is to give?”