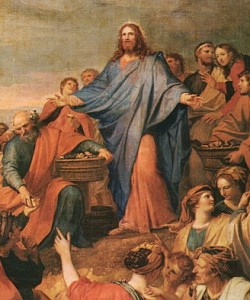 It’s a pretty startling statement that Jesus makes at the end of today’s Gospel:  “Whoever believes in me will do the works that I do, and will do greater ones than these.”

When we think of the mighty works that Jesus had been doing – things like feeding the multitudes and healing the sick – doing greater works than Jesus sounds ludicrous.  Such claims must be the result of a grievous dose of pride.  But, then, he explains how it’s possible: “because I am going to the Father.”

The next two verses, omitted from the lectionary, make it clear that doing these greater works will be accomplished through prayer, because Jesus is at the right hand of the Father, interceding for us.  As Christ put it, “And whatever you ask in my name, I will do, so that the Father may be glorified in the Son.  If you ask anything of me in my name, I will do it.”  So, in reality, Jesus will be doing the greater works, but he will be acting through us.There is a caveat, of course, implied if not made explicit.  If we ask for something in Jesus’ name, to be an effective request, it must be in accordance with his will.  A name in biblical thought, after all, reveals something of a person’s character.  And how can we know what the Father’s will is?  By knowing Jesus, because he is “the way and the truth and the life,” and if we know him, “then you will also know my Father.”

That’s one of the motivations for Stewardship of Time, so that we can get to know Jesus better.  In a frequently used analogy, when two people fall in love, they simply want to spend time in each other’s company.  So, it is when we want to grow spiritually out of love for God.  We become willing to make commitments of time for worship, prayer, meditation, and reading the Scriptures so we can spend time with Christ and get to know him better.

As we come to know Jesus better, we find that we become more attuned to his will for us.  And when we are attuned to Christ, we become fit for use in building God’s kingdom.  In fact, we “like living stones” as St. Peter put it in the Second Reading, can let ourselves “be built into a spiritual house” and “be a holy priesthood to offer spiritual sacrifices.”  That’s because in Christ we are “a chosen race, a royal priesthood, a holy nation, a people of his own.”

Despite the lofty calling to which St. Peter challenges us, the Church is fully aware of the realities of our corporate life.  The original deacons, whose institution is recorded in the First Reading, were named to be responsible for the earthly needs of a segment of the Jerusalem community.

But they were not merely religious social workers.  They showed their Stewardship of Treasure by caring for the daily distribution of the Greek-speaking widows.  And even though the principal reason for establishing the diaconate was to allow the apostles to devote themselves “to prayer and to the ministry of the word,” at least some of the deacons like Stephen and Philip proved to be good stewards of their Talents by preaching and evangelizing.  The fact that their qualifications included being “filled with the Spirit and wisdom” showed they had spent Time with him who is “the way and the truth and the life.”

Whether or not we are called to have an official position in the Church, whether as an apostle like Peter or as deacons like Stephen and the rest or in some other role, we can learn from their examples of Stewardship of Time, Talent, and Treasure, and – like them – we can “announce the praises” of God who called us “out of darkness into his wonderful light.”