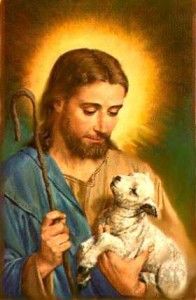 Anyone who has worked with sheep can tell you they are almost helpless. Often considered the most thoroughly domesticated animals in the world, they can seldom survive on their own without human help, unlike goats, horses, cattle, dogs, and cats. Many cannot even give birth without assistance, which makes the lambing season an exhausting time for those who raise them.

But because sheep were domesticated so early, and because they provide so many benefits to humans, they were a mainstay of the economy of the ancient world, and references to them pervade both the Old and New Testaments, including passages read at Mass today.

Jesus assumes familiarity with shepherding in his teaching recorded in St. John 10, where he used varied but related images. The sheepfold, where the sheep are safe; the gatekeeper, who guards who goes in and out of the fold; the shepherd himself, the one who cares for the sheep; the gate of the sheepfold that allows access to the flock – all these are mentioned by Christ.

Although Jesus was a carpenter, his familiarity with shepherding is evident. Whereas in Western Europe the shepherd frequently drives his sheep before him, using sheep dogs to help keep the flock moving in the right direction, in the eastern Mediterranean world, the shepherd normally leads his sheep. They follow him trustingly as he leads them to pasture and to water.

The shepherd, Jesus said, “walks ahead of them, and the sheep follow him, because they recognize his voice.”  That recognition is not merely a matter of familiarity but also of trust, for the sheep know the shepherd will lead them to pastures with nourishing food, and to streams with refreshing water and will guard them from the predators that would attack the flock.

But sometimes a sheep does not follow the shepherd and strays away. Those are the sheep likely to get lost or become prey to a wolf or a lion. St. Peter, in the passage of his First Letter read today, wrote that we had behaved like those. “For you had gone astray like sheep.”  But that is not the end of the story, or it would be a tragedy. No, “you have now returned to the shepherd and guardian of your souls,” Jesus Christ. Just as a shepherd is the guide and protector of his flock, so Christ protects his flock the Church.

Although we sometimes act like sheep, commonly thought to be dumb animals, we really aren’t. We are, after all, human beings created in the image of God, even though we have a fallen, sinful human nature. Although the image of a flock of sheep and Shepherd who cares for them is a useful image to express the relationship of Christ to the Church, it is not the whole story.

We’re responsible for our behavior in ways that no sheep or any other animal is. And that’s what Peter’s hearers recognized when they heard the first Christian sermon on the Day of Pentecost. They heard him announce what God had done for them, and so they asked, “What are we to do?”  In other words, what response do we need to make?

For those who were being converted to faith in Jesus as Lord and Christ, Peter’s answer was, “Repent and be baptized.”  For those of us who are already Christian disciples, the answer is different. We’re called to make a grateful response to God’s gifts. We’re called to share these gifts in love to God and to our neighbor as we use the time, the talent, and the treasure entrusted to us. “What are we to do?”  We’re to be good stewards.