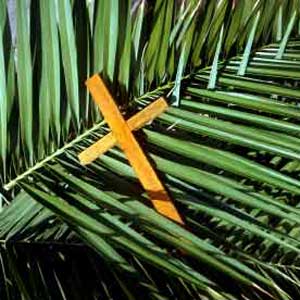 The Palm Sunday liturgy begins with Jesus’ Triumphal Entry into Jerusalem. What a glorious event that must have been! With symbolic touches drawn from the Old Testament prophets, Jesus entered the city to the acclamations of the crowd, who used terminology associated with the Messiah. With crowds beginning to assemble for the coming Passover festival, it seemed that all that remained was for Jesus to be crowned king. That must have been threatening to the Roman government and the religious and financial establishment. No wonder, as St. Matthew records in his gospel, “the whole city was shaken.”

But by week’s end, the city witnessed a very different sight. Jesus had indeed been crowned – with a crown of thorns. He had indeed been proclaimed king – that was the charge Pontius Pilate, the Roman governor, had placed over his head on the cross, his means of execution and his only earthly throne. The declaration, “This is Jesus, the king of the Jews” should be enough to deter any potential revolutionary, Pilate reasoned. He undoubtedly thought this Jesus would be gone and forgotten in a few days.

But once again, God acted in accordance with what he had revealed to the prophet Isaiah (55:8), “For my thoughts are not your thoughts, nor are your ways my ways, says the Lord.”  The earthly powers did not recognize that God’s kingdom was being established even in the midst of what looked like total defeat. They were looking to military forces to grant them security, not recognizing that they are no match for the spiritual powers of love and forgiveness.

The story goes back far before the events of Palm Sunday. The Servant in the First Reading of the Mass from Isaiah 50 stated his obedience to the will of the Lord God. He spoke the words he was told to speak, and he suffered brutality from the wicked, because, the Servant announced, “The Lord God is my help, therefore I am not disgraced.”

The Old Testament Servant prophecy is startling. Even more shocking are the insights found in the early Christian hymn St. Paul quotes in the Second Reading from Philippians. God the Son, we read, emptied himself from the glory he had in heaven to become a human. He went farther than that – in obedience to the Father’s will, he accepted death. That God would accept death to save sinful humans is almost inconceivable. That he would accept death by the most agonizing and degrading method known is practically impossible to grasp.

And yet Jesus the Christ, God the Son become man, did just that. And so, St. Paul wrote, “God greatly exalted him and bestowed on him the name which is above every name, that at the name of Jesus every knee should bend… and every tongue confess that Jesus Christ is Lord, to the glory of God the Father.”  The Kingdom of God was not inaugurated by any of the means we’d think suited for it, but by the methods chosen by God, whose ways are not ours. And the worldly powers at first took no notice, thinking their problem was safely entombed just outside the walls of Jerusalem.

Jesus was willing to undertake the Atonement, the restoration of friendly relations between humanity and God, by giving up his glory to become one of us and, even more, enduring humiliation, suffering, and finally death. He gave up everything for us, even his life.

What are you willing to give up for him in return?  Most of us will not be asked to give up our earthly lives for the sake of the Kingdom, although some people do. It’s been said that the 20th century saw more Christian martyrs, people who died because of their Christian faith, than all the other centuries combined. The 21st century seems to have started along the same route. So martyrdom is an unlikely but possible conclusion to your earthly life.

But if you’re not asked to surrender our lives for Christ, what are you willing to offer him? What commitments of your Time are you willing to use for prayer, for worship, for reading the Bible?  What use are you ready to make of the Talent entrusted to you for the sake of God’s Kingdom and helping his people?  How much of the Treasure you have control of will you share for God’s service?

We hear in the Passion Gospel read today how much God’s love for us cost him. How much are we willing to offer him in return?