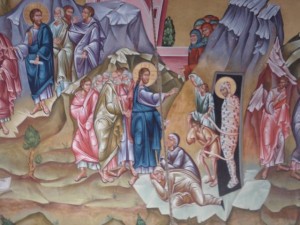 Lazarus and his two sisters Mary and Martha were good friends with Jesus. The sisters sent word to Jesus when Lazarus became ill, but before Jesus got there, Lazarus died. Jesus told Martha, “I am the resurrection and the life; whoever believes in me, even if he dies, will live, and everyone who lives and believes in me will never die,” and asked her, “Do you believe this?”  She responded, “Yes, Lord. I have come to believe that you are the Christ, the Son of God, the one who is coming into the world.”  Although sharing normal human grief at the death of his friend, Jesus called to Lazarus in the tomb, “Come out!”  With his life restored, Lazarus did so.

Even though Lazarus had his natural life restored, rather than receiving the glorified life that Jesus has had since his resurrection, the raising of Lazarus demonstrated Jesus’ power over death. And, as St. Paul wrote to the Romans, the Holy Spirit dwells in Christians and gives us new spiritual life even now; and Christ will raise our bodies in his glorified form at the end of time. This hope causes us to view the Time, Talent, and Treasure entrusted to us from the viewpoint of how we can use them for God’s glory and the benefit of others, for we know our response has an eternal reward.