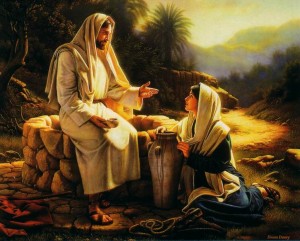 Water is one of the most essential commodities that we know of for human life. When some great natural disaster occurs, the need for clean and safe water become urgent long before the lack of food is so desperate.

As one of our key needs, and yet an abundant substance, water has both literal and symbolic meanings in Scripture and Christian theology. Today’s readings from the Old Testament and the Gospel share the theme of water as main elements in the narratives.

In the reading from Exodus, it is literal water that the Israelites need, to quench both their own thirst and that of their livestock. The need for water was natural and normal. This was provided when Moses, at God’s command, struck the rock, and water poured forth.

The Gospel about Jesus and the Samaritan woman is principally focused on water as a symbol for spiritual realities. Of course, ordinary water to drink is something, as a fully human man, Jesus needed. Ordinary water from the well is what the Samaritan woman was coming to get. But Jesus quickly took the conversation between them to a different level where water had a symbolic meaning.

Jesus led the woman to acknowledge that she had a deeper thirst than one that ordinary water can quench. It was a thirst for spiritual peace, a thirst that only a healthy relationship with God could satisfy. Jesus is the one who could provide that “water,” which he only later (Jn 7:37-39) identified as the Holy Spirit, who can quench all our spiritual thirst.

St. Paul reminds us that God’s love is poured (a water image) out upon us through his gift of the Holy Spirit, who has been given to us. God demonstrates his love for us in many ways – by providing us with water, as he did the Israelites in the wilderness; by sending his Son Jesus, who died for us; by giving the Holy Spirit, who quenches our spiritual thirst.

But the contrast between the Israelites at Massah (Hebrew for “proof”) and Meribah (“contention”) and the Samaritan woman at Sychar is dramatic. The woman, once Jesus helped her realize that he was not talking about ordinary drinking water, recognized the great gift he was giving her and gratefully went off to share the good news with her fellow townspeople.

The Israelites in the wilderness, however, complained against what God had done for them. The Lord had just released them from slavery after a series of devastating plagues he had brought upon the Egyptians. When the Pharaoh decided to recapture them, the Lord had brought them through the Red Sea. Did they not believe that a God who had showed such love toward them and who could work such wonders would not provide all that they needed?  And yet they complained.

One of the fundamentals of being a Christian steward is gratitude to God for the gifts he has given us. The U. S. Bishops asked, “Who is a Christian steward?”  The first element in their answer is “One who receives God’s gifts gratefully” (Stewardship: A Disciple’s Response).

Bishop Eugene Gerber, Bishop Emeritus of Wichita, once said, “A grateful heart silences a complaining voice.”  As we read the Exodus narrative, the people of Israel repeatedly complained against God, showing little gratitude for what he had done for them and even less trust in his ability to provide for them in the future. This Lent let us ask ourselves what God hears most often from us. Does he hear the thankful response of a grateful heart?  Or does he hear a complaining voice?