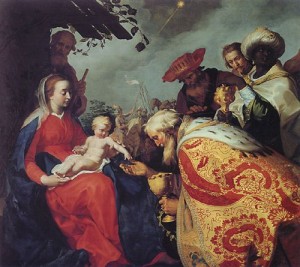 The word epiphany, as we’ve all heard in homilies, comes from the Greek term for “appearance” or “manifestation” and commemorates the coming of the Magi to worship the infant Jesus. It’s ranked as a Solemnity, the highest rank of celebrations in the liturgical year. But why does the Church consider this observance so important?

The key for understanding is to remember that Jesus meets our human spiritual needs in more than one way. First, he is the Messiah – the Christ, the Anointed One – that the Jews were awaiting. The shepherds in the fields who heard the angels proclaim that he is the Christ were Jews, and they rejoiced and came to worship him.

But Jesus is not only the Jewish Messiah; he is also the Savior of all mankind. The Magi, coming as they did from the East, were the first of non-Jews to seek him out. As a result the Epiphany is celebrated as the occasion for the manifestation of Christ to the Gentiles. Thus it is a great missionary feast to celebrate Jesus as the Savior and Lord of all the nations of the world.

While the missionary emphasis may be the best-known aspect of our celebration of the Epiphany, it is also a feast of stewardship. For the wise men did not come empty-handed to worship the new-born child. They brought with them gifts, as we all know: gold and frankincense and myrrh.

John Henry Hopkins, Jr., built on a long tradition of Christian devotion when he described the gifts in the familiar hymn “We Three Kings.”  Comments on the appropriateness of the gifts – gold to crown a king, incense to worship God, and myrrh to prefigure his burial following his death as our Sacrifice – have been offered for centuries.

These gifts, or what they symbolize, are not limited to the ancient Magi. They are also the gifts that we as Christian stewards should bring to Christ Jesus ourselves, for they correspond to the time, talent, and treasure that we ourselves offer. They may seem more exotic, but in reality they represent the same basic spiritual aspirations we have.

Frankincense is used in worship today at Mass, so it can symbolize our gift of Time in prayer and worship that we offer to God. Myrrh, used in preparing bodies for burial, corresponds to the gift of Talent offered to God. Our talent is offered in service, and burying the dead is one of the corporal works of mercy by which we serve the members of the Body of Christ. Gold, of course, represents our Treasure, which we offer to Christ our Lord for carrying out his mission through the Church.

So when you come to worship on the Epiphany, give thanks that Jesus came as Savior of the whole human race. And in your thanksgiving, like the Magi, bring gifts to offer to Jesus, our Lord, our God, and our Sacrifice.