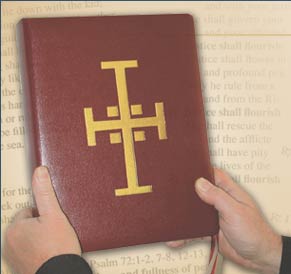 King Ahaz of Judah undoubtedly meant to sound pious when he refused the invitation from God through the prophet Isaiah to ask God for a sign. After all, he knew what was written in Deuteronomy (6:16), “You shall not put the Lord, your God, to the test.”  But the evidence is clear from the account in 2 Kings 16: Ahaz wasn’t pious; he wanted to put his trust in human military strength rather than in the power of God.  Allying his kingdom with the Assyrian empire seemed a surer bet to him than trusting in God.

It’s true that Ahaz was faced with an unpleasant choice. It appeared that the expansionist Assyrian empire was about to conquer all the nations around Judah. Syria and the northern kingdom of Israel wanted Judah to enter the mutual defense pact they had formed against Assyria. When Ahaz refused, they attacked Jerusalem, Judah’s capital, to compel Ahaz to combine his forces with theirs. He feared he’d lose his throne, his kingdom, and even his life in the combined Syrian and Israelite assault.

Had Ahaz trusted the Lord, he would have relied upon God’s promise to David that his dynasty would be established forever (2 Samuel 7:16). Ahaz, after all, was David’s descendant, and it was to remind him of this promise that Isaiah presented him with God’s offer for a sign. But, no, he would not ask for a sign. He preferred the earthly means he knew and trusted rather than spiritual ones he was unfamiliar with. So Isaiah proclaimed the God would give a sign that he himself chose: a virgin would conceive and bear a son, who would be called Emmanuel (Hebrew for “God is with us”).

The siege of Jerusalem by Syria and Israel was indeed abandoned as Isaiah had promised, and those nations were soon conquered by the Assyrians. Ahaz ended up holding on to his own throne, but at the cost of having to strip the Temple of its riches to pay tribute to Assyria. And it seemed that in future generations God’s promise to David was void when Judah was conquered by the Babylonians. But the Davidic line was not been extinguished, the Jews returned to rebuild Jerusalem, and the national life was resumed, although under tenuous circumstances.

Not all David’s descendants were rich or prominent. Among them was a humble but righteous carpenter of Nazareth named Joseph, and God, whose ways are not our ways (Is 55:8), chose him to be the foster father of his Incarnate Son. Joseph, unlike Ahaz, was will to accept God’s invitation and obey.

And thus it was that St. Paul, centuries later, could write to the Romans (1:3) to explain the gospel of Jesus Christ, who was “descended from David according to the flesh.”  God’s promises are true, and he is faithful to them!  And we who four Sundays ago celebrated the Solemnity of Christ the King know that indeed the reign of Jesus, the son of David, is eternal.

The contrast between the responses of Ahaz and Joseph could not be more dramatic. The challenge each faced was a matter of trust. Ahaz failed his test when he refused to trust God to deliver his kingdom from the threatened conquest. Joseph was distressed when he learned his betrothed was pregnant with a baby he knew was not his, but he passed his test with flying colors when he accepted his role in God’s plan.

The challenges we face as stewards are also matters of trust. Do you trust God enough to use your financial resources and other material treasures as you think God wants you to use them?  Do you trust that he will provide you with what is sufficient if you do so?

Or do you trust God enough to use the talents he has given you for his glory and the service of his Church rather than for your own satisfaction alone?  And what about your time?  Do you trust God that if you make your relationship with him primary, and so spend time in worship and prayer, that you’ll still have enough time for your other duties?

For, ultimately, trusting in worldly power, prestige, and riches will bring disappointment and failure. God can provide greater security, but it requires willingness to put our trust in him.