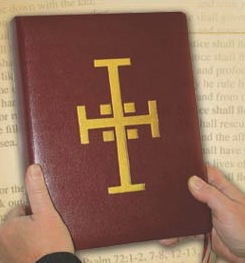 It’s a glorious picture that the prophet Isaiah describes in the eleventh chapter of his book – all people will be treated with justice, wild animals will live with each other and with humans in peace, all mankind will serve the one true God. This happy state will be brought to pass by the Messiah, the Anointed One who will be filled with God’s spirit.

St. Paul, in Romans 15, points out that the Old Testament writings like Isaiah’s prophecy were written for our instruction, so that through their encouragement “we might have hope.”  He urges Christians to think in harmony with each other, in union with Christ, so that with “one voice” we glorify God the Father. He tells us to welcome others into the Church, as we have been welcomed, so all peoples, Jews and Gentiles alike, will join in the worship of God.

But that’s just not what we see when we look around us. The world is filled with conflict, cruelty, and injustice. Lions and leopards are still hunting their prey, and poisonous snakes continue to strike. Humanity is not yet united in worship of the one true God, the Father of our Lord Jesus Christ.

Why does the world still see so much conflict two thousand years after the coming of Jesus, the long-anticipated Messiah? The short answer: It’s because we have not yet taken to heart the message of St. John the Baptist that we hear in today’s reading from Matthew 3.

He must have seemed strange, preaching in the Judean desert, wearing rough clothing and sticking to a diet of locusts and wild honey. But despite his strange appearance, John the Baptist’s message was one we still need to hear. “Repent, for the kingdom of heaven is at hand!”  The urgency was that the kingdom of heaven was about to be established in a new way through the ministry of Jesus, and John was the one whom God had sent to provide its immediate preparation.

The core of John’s message is packed into the word “repent,” a word many people misunderstand. The biblical meaning of “repent” doesn’t mean just to feel sorry for what you’ve done wrong. The core meaning is to turn from wrongdoing and to amend your life, to go in a new direction following the path God wants you to. Repentance can include remorse for the wrong one has done, but the key concept is a change of behavior from evil toward the right. As John the Baptist said to the Pharisees and Sadducees, the acknowledged religious leaders of his day, “Produce good fruit as evidence of your repentance.”

He says the same to us. All of us, in one way or another, need repentance. We, too, need to repent and produce good fruit. Undoubtedly we do produce some good fruit. But maybe we should produce more. This Advent, the beginning of a new year liturgically, is a good time to examine the way we carry out our stewardship. For all Christian disciples, like it or not, are stewards. The only question is whether we’re good ones or bad ones.

This sounds challenging rather than consoling, but that’s the way it goes in the Christian life. Repentance has to come before consolation. Does the way we use our time show evidence of our repentance? How about the use of our talent? And our use of the treasure God has entrusted to us?

We may protest that this seems too hard. It’s too much to ask us to change the way we spend our time and our treasure and how we share our talent, especially during the holiday season, we may say. But look at the world envisioned in the prophecy of Isaiah, and contrast it with the world you see around you. Repentance is the only way to get from where we are to what God intends the world to be. As G. K. Chesterton wrote, “The Christian ideal has not been tried and found wanting; it has been found difficult and left untried.”

Besides, what choice do we have? The kingdom of God is at hand. And the King, the one whose way John the Baptist was preparing, “will clear his threshing floor  and gather his wheat into his barn, but the chaff he will burn with unquenchable fire.”  Are we ready for him to make his decision about us?