What image pops in your mind when you think of a king?  Is it an image of a man wearing a crown, dressed in robes trimmed with fur?  Or is it the image of a Roman emperor?  Maybe you have a mental image of a particular individual, Henry VIII, perhaps. 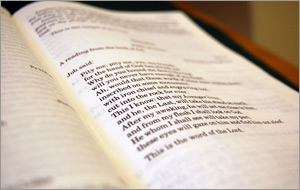 One thing that’s almost certain: the portrait of Jesus Christ presented in today’s readings do not fit your image of a king.

In 2 Samuel 5, we read how the Israelites from the northern tribes, after the death of Saul’s son Ishbosheth, came to David to ask him to be their king.  David was already recognized as king of his own tribe, the southern tribe of Judah, and they all needed his military leadership against the Philistines, who threatened to conquer them.

But the sort of leader they wanted went beyond a simple commander in war.  They said the Lord had promised he’d also be a shepherd over God’s people.  A shepherd does more than protect his flock of sheep from wolves and other wild animals.  He also leads them to pastures to feed and to streams where their thirst can be quenched.  A shepherd takes care of almost every aspect of the flock’s life.

A king, then, who is a shepherd does not spend all his time enjoying himself in fancy palaces.  He spends his time and energy caring for the citizens of his kingdom.

Then St. Paul in Colossians 1 presents another aspect of Christ’s kingship.  The Father has “delivered us from the power of darkness and transferred us to the kingdom of his beloved Son, in whom we have redemption, the forgiveness of sins.”  So this king is one through whom we have forgiveness of sins.  Indeed, Christ’s ministry was “to reconcile all things…making peace by the blood of his cross.”

So Jesus as King does not simply reign over his subjects.  He shed his blood to make peace, to reconcile all things with God for the forgiveness of sins.  That’s a picture of a very unusual king indeed!

The starkest picture of Jesus as King comes in Luke 23.  Jesus is clearly identified as a king.  The inscription made it clear, “This is the King of the Jews,” but his throne was a cross and his crown was made of thorns.  And the earthly rulers and the Roman soldiers jeered at him, “He saved others, let him save himself.”

And that’s the whole point.  He could not save himself because his suffering and death are the means by which he saved others, including ourselves.  The whole character of his reign – Jesus is a shepherd, a peacemaker, a savior – is determined by his sacrifice of himself, “by the blood of his cross.”

Of course, we know the crucifixion was not the end of the story.  He rose triumphant over sin, Satan, and death on Easter, now reigns in heaven, and will return in glory at the end of time.  But the fact remains that the only throne Jesus has had on earth thus far is the wood of the cross.

How then do we respond to such a king?  With awe, of course, but not the sort of awe we might feel when we’d see a king ready for war surrounded by a huge army or a king in state in the throne room of a vast palace.  No, the awe we feel when we think of Christ the King is to wonder how he could love us so much as to mount that throne and to die an agonizing death on the cross, with the jeers of the onlookers echoing in his ears.

Our awe should spill over into thanksgiving for the love Jesus Christ our King demonstrated at the crucifixion.  And gratitude is at the heart of stewardship – thanksgiving for our creation and all the material blessings of this life, but also thanksgiving for the spiritual blessings we receive.  At the heart of those is thankfulness that through the blood of the cross Jesus did reconcile us to the Father so that we do “have redemption, the forgiveness of sins” (Colossians).  And our gratitude for this blessing affects how we use the time, the talent, and the treasure entrusted to us, so that we want to employ them to extend the reign of Jesus our King.