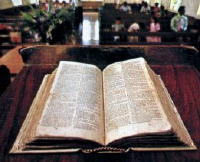 What can you when it seems that the whole world as you know it is collapsing around your head?  When you feel threatened and vulnerable?  Be prepared, but do not lose faith and do not panic is the message our Lord has for us, according to Luke 21.

This whole discourse from Jesus must have shocked the disciples.  They were in Jerusalem shortly before the Passover, worshipping in the public areas of the Temple.  Some were commenting on the grandeur and the beauty of the Temple.  Then Jesus caught them by surprise by responding that, impressive as it was, the whole Temple would be destroyed.  The impact this prophecy made on its hearers must have been enormous – some who overheard it even used it as evidence against Jesus at his trial (Mk 14:57-59).

Then Jesus went on to make more global assertions about the end of the world, using apocalyptic language familiar to his hearers.  There would be wars and revolutions among nations of the world; earthquakes, plagues, and famines across the earth; and even disturbances in the heavens before the day of the Lord comes.  That day of the Lord, the day of judgment at the end of history, will mean doom for the doers of evil and the triumph of God’s justice for those who look to him as the source of good, as we read in Malachi 3.

Many years will pass between the destruction of the Temple, which took place under the Romans in 70 A.D., and the Day of the Lord.  Among the many events of these intervening centuries comes the persecution of Jesus’ followers.  Jesus warns us that this may be severe indeed, including hatred and rejection by society, betrayal by family and friends, even prison and execution.  We will have the opportunity to testify to the truth of the Gospel at our trials, when Christ himself will give us the message we are to proclaim.

And when the End comes?  No matter what we suffered, no matter if we were killed for our loyalty to Christ, we shall experience the healing rays of the sun of justice.  “Do not be terrified,” Jesus said.  “By your perseverance you will secure your lives.”

How does this dire scenario with a joyous ending affect our lives as stewards today?  Jesus warned, “It will not immediately be the end,” after the destruction of the Temple.  He mentions deceivers that will come in his name, and all the turmoil among earth’s peoples and throughout the natural order.  He tells of the coming persecutions, which have continued throughout the Church’s history.  But through all these events, don’t be deceived and don’t be terrified.  In other words, carry on your normal life, be loyal to Christ, and depend on his strength to bring you through your trials.

That’s what St. Paul was writing about in 2 Thessalonians 3.  Even though he was in Thessalonica on a temporary basis to preach the gospel and establish a Church, Paul and his companions did not depend on the generosity of his converts.  Instead they worked at their own trades to support themselves.  He had heard that some of the Thessalonian Christians – in expectation of Jesus’ early return – had quit their jobs, and now, with too much time on their hands, were interfering in the personal affairs of other Church members.  His solution was simple: if anyone is “unwilling to work, neither should that one eat.”

So although we know that this present age will come to an end, and meanwhile we may experience rejection and persecution, nevertheless we are called to carry on with our regular duties in our ordinary lives.  So we’re to work quietly, mind our own business, and eat our own food.  The sort of balanced life St. Paul had in mind means that we have some time to pray and spend with family.  We have our talents to offer for the service of the Church and of those in need, and we have some treasure to give for the spread of the Gospel and aid for those unable to work.  That sort of life glorifies Christ and benefits our own souls.