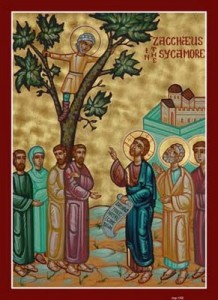 Conversion is more than just a dramatic emotional experience leaving behind lingering warm feelings, although that’s the concept held by many people.  A conversion, rather, is a total change from one way of life to another.

Zacchaeus found out how much conversion changed his life when he encountered Jesus, as we read in Luke 19.

Zacchaeus is described by St. Luke as “a chief tax collector and also a wealthy man.”  Those two characteristics were undoubtedly connected.  Tax collectors, remember, were viewed as traitorous collaborators with the Roman forces occupying Palestine, men willing to fleece their fellow Jews.  After all, as long as tax collectors handed over the sum the Roman government expected, they were free to pocket whatever surplus they had extracted – and there was no appeal from their demands, so most of them ended up with comfortable amounts in their coffers.  And a chief tax collector like Zacchaeus did even better.  Being head of all the tax collectors for the region around Jericho, he was able to claim a share of what the tax collectors below him in rank had extorted from the populace.  Undoubtedly he had grown wealthy indeed.  He might even have won a contest for the most hated man in town.

But despite the animosity most residents of Jericho felt toward Zacchaeus, he had normal human impulses.  And this day his curiosity was strong.  He must have heard about Jesus of Nazareth, this rabbi from Galilee whose preaching amazed his hearers and whose miracles of healing had been talked about all over Judea.  And now, people said, this Jesus was coming through Jericho on his way to Jerusalem.  It was Zacchaeus’ chance to see this man for himself.

One challenge remained, however.  The crowds were lining the narrow streets, and people would never let someone as despised as Zacchaeus through to the front row.  And then an inspiration hit him.  He could climb a tree a little way ahead and see over the throng.  And so he did.

Can you imagine how Zacchaeus felt when Jesus stopped under the tree, looked up, and spoke to him?  “The visiting celebrity invited himself to my house for dinner!  He could have gone to any home in Jericho, and he chose mine.  I’m not an outcast now, am I?”  Something along those lines must have gone through his mind.

Then Zacchaeus discovered what many had already found out, and what multitudes down the centuries since have learned: you cannot meet Jesus without being changed.  Preachers and writers and artists may make him seem bland, but that’s not the reaction of anyone who actually met him.  You might love him or hate him, adore him or despise him.  You either leave everything to follow him, or else you cry out, “Crucify him!”  Jesus is not bland, and no one has ever found him boring.

Certainly people gossiped.  “He has gone to stay at the house of a sinner,” the people of Jericho complained.  Their meaning, of course, was, “With all the upstanding, loyal Jews in Jericho, why is Jesus honoring the most corrupt man in town, the collaborator with the conqueror?”

Jesus had other plans, and still has them today.  This Gospel passage concludes with Jesus statement of his mission, “For the Son of Man has come to seek and to save what was lost.”  As he stated on another occasion, “Those who are well do not need a physician, but the sick do.  I did not come to call the righteous but sinners” (Mark 2:17).

As the prayer in Wisdom 12 reads, “You rebuke offenders little by little, warn them and remind them of the sins they are committing, that they may abandon their wickedness.”  Zacchaeus qualified as one of the offenders but responded to Jesus’ powerful personality.  The result showed that God’s patience with sinners does bring results.

When Zacchaeus experienced conversion – a total transformation of his goals from seeking to satisfy himself to seeking to obey God – he changed his whole way of life.  His treasure was no longer his; it was God’s.  He determined to make four-fold restitution to those he had cheated.  Of what he had obtained legitimately, he would give half away.

Zacchaeus had become a disciple, and he discovered stewardship, which, as our bishops tell us, is a disciple’s response.  Because treasure, more than time or talent, had been at the center of his life, his response emphasized the financial aspect of his conversion.  That simply demonstrated the genuineness of his conversion, for Jesus had said, “For where your treasure is, there also will your heart be” (Matthew 6:21).  Zacchaeus’ treasure would now be distributed back to the residents of Jericho, and his heart would follow.

As it was with Zacchaeus, so it is with us.  When we encounter Jesus, we too are changed.  We either reject him or acclaim him as our Lord and our God.  If we do the latter, we experience conversion, and become his disciple.  And as a disciple, we are called to respond as a steward, receiving gratefully and using responsibly the time, talent, and treasure that have been entrusted to us.  Our experience may not be either as instantaneous or dramatic as the one Zacchaeus had, but it needs to be as genuine.  Then our Lord will announce to us as he did to Zacchaeus, “Today salvation has come to this house.”