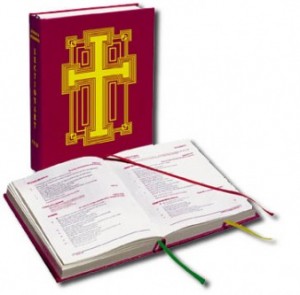 Summary: The parable of the Prodigal Son illustrates God’s loving and generous character.  The father gave to the younger son, who wasted what he had received, but then forgave him and welcomed him home.  The father also forgave the older son, who had stayed home but resented his father’s generosity.  We are called to imitate the father by sharing what has been given to us and by welcoming all who are seeking God.

The fifteenth chapter of St. Luke contains three parables of Jesus, including the one probably the best known of all, that of the Prodigal Son.  We’re all familiar with the story:  A man has two sons.  The younger asks for his share of the inheritance while his father is still alive.  He goes off and spends it all in wild living.  Poverty-stricken, he decides to return home, because his father’s servants are better off than he is.  His father welcomes him, forgiving him and restoring him to the family.  The older brother is resentful of his younger brother’s welcome and refuses to join the family celebration.

The brothers seem to be very different – the younger, a spendthrift who wants to get away from the restrictions of home for a life of indulgent fun; the elder, a responsible, hardworking, and respectable homebody.

But the two brothers share one important characteristic:  they both relate to their father only for what they can get from him. The younger brother wants his share for fun, and then wants back in, if only as a servant.  The older brother is resentful of his younger brother, because he thinks no more money should be spent on him; everything his father has left is rightfully the other brother’s and should be hoarded.

Perhaps, instead of concentrating on the two sons, we should pay more attention to the father.  Indeed, some have claimed that this should be known as the parable of the Forgiving Father.  The father, of course, had been at home raising and supporting his family all those years.  But he forgave his younger son, the prodigal who had rejected the father’s way of life and values, and even welcomed him home.  In addition, he came out to implore the older son to join the celebration, rather than just ordering him in as he had the right to do.  The older son, too, needed forgiveness for his resentment.

The father, of course, represents God in this parable.  God shares his gifts lavishly, even extravagantly, with his people.  Even when we squander them “in a distant country” he’ll welcome us and forgive us if we decide to return home.  And he treats us lovingly, even when we have been unloving as the elder brother was.

If God has so generously given his gifts and lovingly forgiven us, what should our response be?  We’re called to give to those in need around us, whether their need is of material assistance, love, or forgiveness.  Our time, talent, and treasure are gifts provided to us by God.  Our mission is to pass on to others those gifts we have received.